“28 Days Haunted,” the recent hit series on Netflix, was set in three different locations, one of which was Captain’s Grant’s Inn located in Preston, CT. Guests will be able to participate in a paranormal investigation in this haunted location.

“28 Days Haunted” featured principal, Sean Austin, will return to Captain Grant’s Inn after his tenure of being isolated there away from the rest of the world to explore the paranormal activity for 28 days. Connecticut’s Sean Austin is a psychic investigator, demonologist, and Tik Tok sensation who will co-host guests into the 17th century estate. The ghost-hunt will be open to a limited number of participants and will be the first collaboration of Sean Austin with “The Shaman and The Showman.”

On the Netflix series, Sean Austin and two teammates had epic evidence from their expedition inside the inn. One scene shows Austin trying to cross a spirit over, when suddenly a wooden chair flew down the stairs and broke. There were also doors slamming aggressively by themselves. Sean’s main reason for revisiting the site of one his most famous explorations is what he calls the most cherishing experience he has ever had in the paranormal world –and it didn’t even make the show’s final cut. On his new video, Sean plays his acoustic guitar to a love song he wrote for a spirit named Mercy. She was married to Captain Grant. The interesting thing is that Sean was having psychic visions while filming the show, and, out of nowhere, he could hear the acoustic chords of the song he had planned to write about her and her story. After reviewing audio evidence the next day, he realized – before he could even explain what was happening – that she was humming the melody on EVP (electronic voice phenomenon, common to parapsychology). Sean describes being almost in tears while playing the song and having her disembodied voice hum along. https://youtu.be/etmp_ZbFlCY

At a recent Paranormal Convention in Salem, MA, Sean revealed the evidence and played the song to the audience. The convention was produced by The Shaman and The Shaman’s Nick Grossmann and Charles F. Rosenay!!!, who also present Connecticut’s original Paranormal Convention, and host investigations throughout New England and New York. Nick heard the song and described it as both the most beautiful, yet the most morbid recording he has ever heard.

After the Salem Para Con, the three investigators drove to Preston, CT on a windy evening to do a site inspection of the 17th century Inn. As Nick, Charles, and Sean were getting a feel for the property, Nick saw the apparition of a woman in a white gown float by in the next room. The three went to the upstairs section only to see shadow beings and hear knocks. When they went back downstairs Charles took a photo which revealed a young transparent woman in a dress and a bonnet holding a candle. Nick reported that he always knew about the place’s haunted history but never realized how much activity there was within its walls. It was then that the three decided to organize an event and open it to the public for a proper investigation.

Guests will be able to attend this unique and historic haunted happening taking place over a four-day period, February 16-17-18-19, with the option of an overnight stay inside the Inn. Each evening will begin with a meal and paranormal class. This session will focus on how to use paranormal investigation tools and equipment combined with tapping into individuals’ actual psychic abilities. Then there will be a comprehensive investigation inside the Inn, following in the footsteps of the “28 Days Haunted” series, as well as outside – where an ancient cemetery rests on the grounds. This is a great opportunity to learn first-hand ghost-hunting skills from Sean Austin. There will be an autograph session, and time allotted for a questions and answer period. Each evening is limited to 20 participants, and will last approximately three hours.

Additionally, five VIPPs (“very important paranormal persons”) will get to spend a night in one of the Captain Grant’s Inn bedrooms, including the Adelaide Room, as seen on “28 Days Haunted.” The stay includes breakfast, drinks, desserts, and other amenities.

Captain Grant’s Inn was not only the subject of “28 Days Haunted,” it was also featured on the Jack Osbourne-produced “Portals to Hell,” along with being mentioned on “The Osbournes Want to Believe” TV show.

The cost for the “28 Days Haunted… Revisited” experience is $99 per person (per night). Overnight accommodations (separate from the paranormal event price) are $299 per night single or double occupancy based on availability. 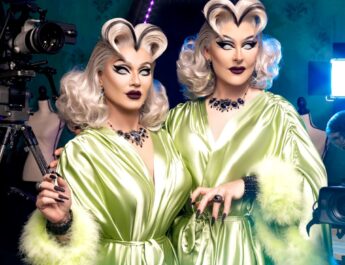 October Kicks Off with TRICK ‘R TREAT, HALLOWEEN, & THE CROW Apparel from Fright-Rags