London Horror Festival: Superstition and Colonialism Clash in ‘A Curse of Saints’

Having performed twice at the London Horror Festival with their hit chiller ‘Peaceful’, The Off-Off-Off-Broadway Company return this October with their brand new, one-man show, ‘A Curse of Saints’.

Cyprus, the late 19th century. The British have begun to take the island from the Ottomans. When a boy is found dead in an olive grove, his fellow villagers blame the ghost of an Anatolian gypsy. A local shepherd, however, has been suffering from nightmares and hallucinations, and believes them to be warnings about the coming Brits. He is convinced that a boy’s death is only a sign of worse to come…

‘This piece was actually inspired by Brexit,’ says Loizou, ‘what with the debates on free movement, xenophobia and sovereignty that surrounded the recent Referendum. I thought it would be fascinating to use that as the springboard for a horror piece, since the genre has always been an accurate reflection of society’s concerns.’

Having made the UK his home in 2001 at the age of 16, Loizou has no time for nationalism. He was born and raised in a divided Cyprus (a Greek South and a Turkish North, following the war of 1974), but has had British nationality from birth. His grandparents, being colonials, were the same.
‘My homeland’s been independent for only 14 years of its recent history,’ he continues. ‘I went to an international school where I was the only fully Cypriot boy in my class. My countrymen often mistook me for foreign, whereas Brits tell me they’d never guess I wasn’t born here.’

True to Cyprus’ history, the world in which ‘A Curse of Saints’ takes place is a multicultural one. A melting pot of European and Middle-Eastern peoples and traditions, where Muslim and Christian beliefs intertwine. Greek Orthodox hymns sit alongside folk songs from Asia Minor.

‘A Curse of Saints’ is the first part of a planned triptych for The Off-Off-Off-Broadway Company, who will each be creating a one-person show inspired by their cultural heritage. 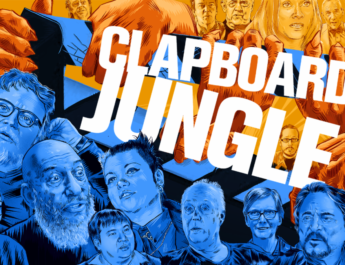 ARROW Goes to the Heart of Filmmaking with CLAPBOARD JUNGLE, Streaming April 19