Here are some of the horror DVD/Blu-Ray releases for May 7th!

A mother concerned about her young son’s disturbing behavior thinks something supernatural may be affecting him.

A medieval warrior’s gruesome collection of heads is missing only one – the monster that killed his daughter years ago.

Two Children… Two Adults… One Unspeakable Crime! Captivating and disturbing, this highly intense psychological drama with its haunting, twisted notion of sexuality puts a new spin on the characters from Henry James’ celebrated ghost story, “The Turn of the Screw.” Marlon Brando (The Appaloosa, The Missouri Breaks) stars as Quint, a gardener who powerfully impacts the lives of young orphans Miles and Flora, who are left in the care of their governess (Stephanie Beacham, Dracula A.D. 1972, TV’s Dynasty) and housekeeper (Thora Hird, A Kind of Loving). Obsessed with the charismatic Quint, the children are mesmerized by his warped views of love and life and soon pattern their own lives after his crude, secret courtship with their governess. When the housekeeper finds out about the lovers’ relationship, she decides to fire them, leaving the bereft children to take matters into their own chilling hands. Top-notch direction by Michael Winner (Hannibal Brooks, Death Wish) and co-starring the great Harry Andrews (S.O.S. Titanic, Modesty Blaise).

A pregnant con woman on the run seeks refuge in a desolate convent only to be met with an unsettling and horrendous evil waiting on the other side.

Charlie and Buzi are ghost enthusiasts fascinated by the legend of the scariest road in America, Mt. Misery Road. The couple continues their adventure to the woods until they realize they’ve got into the whirlpool of paranormal activities.

A young woman named Larissa (Stephanie Ash), encounters an entity that transforms her into death itself, and reins a violent storm against Dallas Henson (Ry Barrett) and the family that resides there. 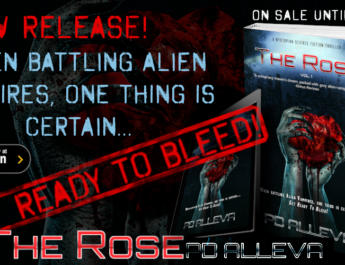 ‘The Rose’ Out Now – Bloggers Join the Blog Tour