Arrow Academy debuts in the US in March 2017

One of the world’s leading distributors of independent, arthouse, and world cinema to be distributed via MVD Entertainment Group

MVD Entertainment Group furthers the distribution of the Arrow Films brand in the US with Arrow Academy, one of the world’s leading distributors of Catalog and New Release independent, arthouse, and world cinema. The label releases definitive and prestige edition films by revered maestros of cinema from across the globe, including filmmakers such as Federico Fellini, Alfred Hitchcock, Woody Allen, Stanley Kubrick, Fritz Lang, R.W. Fassbinder, Roberto Rossellini and Jean-Luc Godard.

Arrow Academy will launch in the US & Canada in March 2017 with five titles.

ARROW ACADEMY FEATURES:
– Definitive editions of classic arthouse films from across the world.
– World class restoration and an award-winning label.
– A label which goes above and beyond to release films in their original release format.
– High-end and well-produced boxsets aimed at the cinephile audience.
– New and insightful extras on each release. 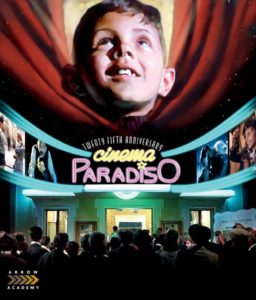 A CELEBRATION OF YOUTH, FRIENDSHIP, AND THE EVERLASTING MAGIC OF THE MOVIES

A winner of awards across the world including Best Foreign Language Film Oscar, five BAFTA Awards including Best Actor, Original Screenplay and Score, the Grand Prize of the Jury at the Cannes Film Festival and many more.

Giuseppe Tornatore’s loving homage to the cinema tells the story of Salvatore, a successful film director, returning home for the funeral of Alfredo, his old friend who was the projectionist at the local cinema throughout his childhood. Soon memories of his first love affair with the beautiful Elena and all the high and lows that shaped his life come flooding back, as Salvatore reconnects with the community he left 30 years earlier.

Presented in both the original award-winning cut and the expanded Director’s Cut incorporating more of Salvatore’s backstory, newly restored from original negative materials.

Restored from the original camera negative and presented in two versions – the 124 minute Cannes Festival theatrical version and the 174 minute Director’s Cut
Uncompressed original stereo 2.0 Audio and 5.1 DTS-HD Master Audio options
Optional English subtitles
Audio commentary with director Giuseppe Tornatore and Italian cinema expert critic Millicent Marcus
A Dream of Sicily – A 52-minute documentary profile of Giuseppe Tornatore featuring interviews with director and extracts from his early home movies as well as interviews with director Francesco Rosi and painter Peppino Ducato, set to music by the legendary Ennio Morricone
A Bear and a Mouse in Paradise – A 27-minute documentary on the genesis of Cinema Paradiso, the characters of Toto and Alfredo, featuring interviews with the actors who play them, Philippe Noiret and Salvatore Cascio as well as Tornatore
The Kissing Sequence – Giuseppe Tornatore discusses the origins of the kissing scenes with full clips identifying each scene
Original Director’s Cut Theatrical Trailer and 25th Anniversary Re-Release Trailer 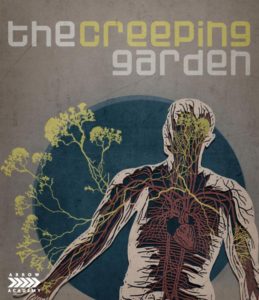 A REAL-LIFE SCIENCE-FICTION MOVIE EXPLORING A WORLD CREEPING RIGHT BENEATH OUR FEET, WHERE TIME AND SPACE ARE MAGNIFIED AND INTELLIGENCE REDEFINED.

The Creeping Garden is an award-winning feature-length creative documentary exploring the extraordinary world of the plasmodial slime mould as revealed through the eyes of the fringe scientists, mycologists and artists who work with them.

Long overlooked by biologists, in recent years this curious organism has become the focus of much research in such areas as biological-inspired design, emergence theory, unconventional computing and robot engineering, much of which borders on the world of science fiction. The film transports us from the laboratory into its natural habitat, depicting these otherworldly lifeforms using startling time-lapse macro-cinematography to reveal hidden facets of the world around us.

Co-directed by the artist film-maker Tim Grabham (KanZeOn) and author and film critic Jasper Sharp, with an original soundtrack composed by celebrated musician and producer Jim O’Rourke (Sonic Youth, Grizzly Man), The Creeping Garden is a unique exploration into a hitherto untapped subject matter, immersing the viewer within the worlds of the observers and the observed.

PLUS… FIRST PRESSING ONLY: Illustrated collector’s booklet containing writing on the film by Jasper Sharp 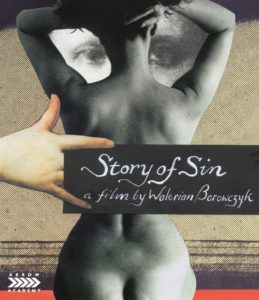 The life of a beautiful, young and pious woman is thrown into chaos when her parents takes in a dashingly handsome lodger. Having embarked on a torrid affair, the lodger goes off to Rome to seek a divorce from his estranged wife.

Unable to live apart from her beloved, our hero leaves home only to fall prey to the infatuations and lusts of a band of noble admirers, unsavoury criminals and utopian do-gooders…

The only feature Walerian Borowczyk (The Beast, The Strange Case of Dr Jekyll and Miss Osbourne) made in his native Poland, Story of Sin transforms Stefan Zeromski’s classic melodrama into a deliriously surrealistic meditation on l’amour fou.

FIRST PRESSING ONLY: Fully illustrated collector’s booklet featuring new and archival writing, including an exclusive interview with the producer of Story of Sin, director Stanislaw Rozewicz; a text by art historian and one-time Borowczyk collaborator, Szymon Bojko; and excerpts from Borowczyk’s memoirs presented in English for the first time.

Ludwig. He loved women. He loved men. He lived as controversially as he ruled. But he did not care what the world thought. He was the world.

A string of masterpieces behind him – including Ossessione, Senso, The Leopard and Death in Venice – the great Italian director Luchino Visconti turned his attentions to the life and death of King Ludwig II of Bavaria in 1972, resulting in an epic of 19th century decadence.

As opulent as any of Visconti’s epics – Piero Tosi’s costume design was nominated for an Academy Award – Ludwig is presented here in its complete form in accordance with the director’s wishes and features the English-language soundtrack for the first ever on home video.

Property is No Longer a Theft

Having tackled the corrupting nature of power with Investigation of a Citizen Above Suspicion and taken an angry, impassioned look at labour relations with The Working Class Goes to Heaven, Italian master Elio Petri next turned his attentions to capitalism for the darkly comic Property is No Longer a Theft.

A young bank clerk (Flavio Bucci, the blind pianist in Dario Argento’s Suspiria), denied a loan by his employer, decides to exact his revenge the local butcher (Ugo Tognazzi, La Grande bouffe) who is not only a nasty, violent, greedy piece of work but also one of the bank’s star customers. Quitting his job, the clerk devotes all of his time tormenting the butcher, stealing his possessions one-by-one, including his mistress (Daria Nicolodi, Deep Red).

Told in an off-kilter fashion by Petri, abetted by the woozy sound design and another outstanding score by Ennio Morricone, Property is No Longer a Theft presents a caustic, blackly comic look at a corrupt society. 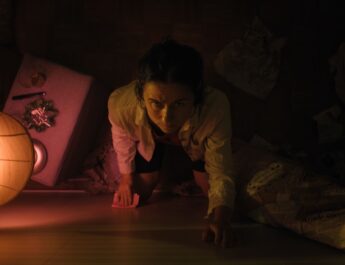