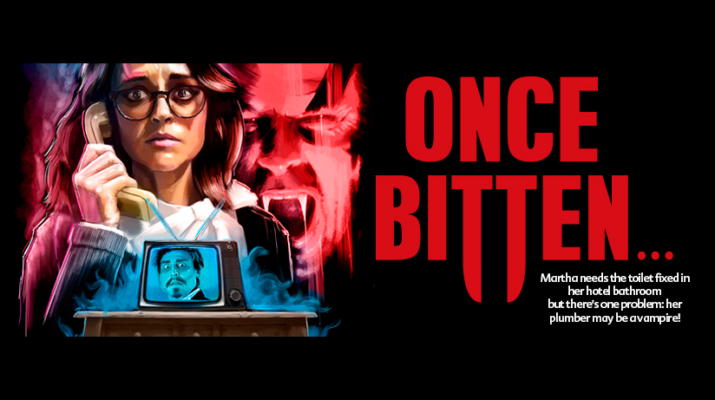 Manchester-based Duck66 Films have launched a crowdfunding campaign to help bring their latest horror short Once Bitten… to the world.

Once Bitten… tells the story of a book publisher, Martha Swales, who has problems with the plumbing in her hotel bathroom one stormy night. Unfortunately the plumber who turns up might be a vampire!

Martha Swales is played by Lauren Ashley Carter and Garth Maunders appears as Dredvoka the plumber (or is he a vampire?). Once Bitten… also features the inimitable Sir Dickie Benson as himself in the role of a TV presenter.

Once Bitten… was directed by Pete Tomkies from a script by Kevin T Rogers.

Although Once Bitten… takes place at a hotel in 1980s New York it was filmed on a purpose built set at A4 Studios in Altrincham, South Manchester. Principal photography was completed in 2017 and Once Bitten… is now in the final stages of post-production, ready to head out to film festivals from July 2018.

And that’s where the film makers are asking for your help.

Director Pete Tomkies explained: “Like most independent films Once Bitten… was shot on a micro-budget and every penny spent is up there on the screen. But a film isn’t anything without an audience to see it”.

“We would love to get Once Bitten… to as many film festivals as possible around the world so that everyone has a screening near them. Unfortunately, festival submission fees quickly add up so that’s why we have launched our Film Festival Fee Fundraiser”

“We won’t be taking a penny of any money raised for our time. All of the proceeds raised by the crowd funder will go on festival submission fees and associated costs”.

The crowdfunding campaign has some very special perks for supporters with the chance to own props from Once Bitten… including items signed by the cast and even to have your name in the credits of the film. Uncle Frank Productions have designed the movie poster to accompany Once Bitten… on its festival world tour and copies are available as rewards for supporters including a very limited number signed by Lauren Ashley Carter and Garth Maunders.

The Once Bitten… website has a wealth of information about the film including Q&As with the cast and crew and an extensive gallery of behind the scenes photos.