This week’s film, “The Ghost Bride” tells a supernatural horror story that a girl is forced to marry a dead person under financial burden and features Chinese tradition of ghost marriage in Filipino context. Its intriguing plots and special effects are sure to make viewer’s hair raise. 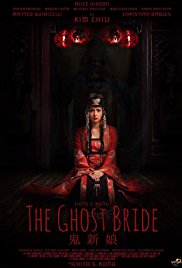 “The Ghost Bride” Description: Due to their family’s continuous financial problem, Mayen (Kim Chiu) is ready to do everything she can in order to ease their burden. By chance, she meets Angie Lao (Alice Dixson), a Chinese matchmaker who offers her a business proposal: To be the bride of a wealthy man who’s already dead. Mayen downright declines Lao’s offer because marriage is not included in her priorities and she is currently in a long-term relationship with her boyfriend, Clinton (Matteo Guidicelli). Mayen is forced to accept Lao’s offer when she found out that she is arranged to marry another man aside from Clinton. She also needs the huge amount of money Lao is offering to pay off her family’s debts. What she doesn’t know is that the “deal” is actually a deadly curse and the people around Mayen are suffering because of it. To finally end the curse, Mayen must do anything and everything to save herself and her family.