This August, stay out of the shadows.

From High Octane Pictures, the studio that brought you Jurassic Games and Clowntergiest, comes It Lives Inside, premiering on digital this summer.

A chronic sleepwalker reads from a mysterious book that foretells his impending demonic possession. He then struggles to hold his family together as the ancient evil threatens to consume everything he holds dear.

Rett Terrell (The Jurassic Games) and Alissa Rose Ford (Army of Frankensteins) star in a Jeff Hall film, released August 7 on VOD and September 4 on DVD.

-PH: How did the film come about, sir? + Tell us about the script – was it inspired by anything in particular?

-JH: I had been writing for years and when my friend Sean Bingham began buying and making equipment we simply dived in. The spark of the story was a very small blurb I read about a Native American cannibal spirit called “Atshen”. I just wrote a little story about what if that happened today.

-PH: The movie is very grounded. Is it hard to ground a genre movie?

-JH: Because this would be our first time out, the script was intentionally simple…minimal cast and locations. So, I purposefully set rules for myself. 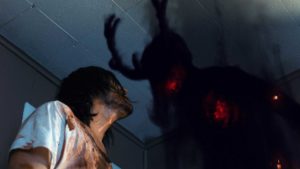 -PH: How did you pitch the film to your cast?

-SB: We met Michelle DeLong who runs a local acting school here in Oklahoma City. She immediately got what we were trying to do and she sold it for us to the local acting community.

-PH: How tough is it for not only you as a filmmaker, but for your cast, to shoot some of the heavier scenes?

-JH: I had hoped for a sense of “falling”. Things go wrong, more things so wrong, and then SMACK! You hit the concrete. Rett and Alissa had to pull on some serious baggage.
.
-PH: What do you use for blood on a movie set?

-SB: We used stage blood from Dapper Cadaver. It doesn’t stain and it washes off super easy. We tried other fake bloods but they all stained and looked like kool-aid on white t-shirts.

-PH: And the look of the film, based on the trailer, suggests a similar tone to the classics. That intentional? Not at all, but I’ll take that as a complement.

-SB: We had in mind something similar to The Shining regarding pacing and iconic scenes like the hands coming out of the ground. Those are the classic elements of horror films that aren’t in the slasher genre.

-PH: What is it about this topic that fascinates audiences, you think?

-JH: It’s funny how much we fear the supernatural. I think it’s the unknown. I don’t know if it’s cultural or instinct, but I think we can universally agree that we’d prefer not to know if that dark thing in the corner of our eye is real or not.

JH: About six months ago.

Watch the “Haunt the Halls” Collection at DarkMatter TV