This year from October 11 through October 15th we have a so much planned that builds on what we started last year. We will of course have the very popular location bus tours, with even more added locations we didn’t get to last time, the Amazing Eat the Rude Dinner, once again curated and hosted by Hannibal Food Stylist Janice Poon. Of course there will be Cast Members and this time Actual Crew Members! to answer all your behind the scene questions! There is so much we have planned, so continue to watch this space as we add more exciting activities! 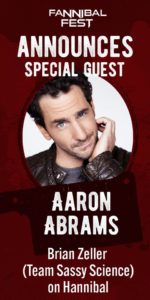 Along with his acclaimed roll as Brian Zellar on Hannibal, he has also guest starring on several shows, Abrams has also appeared in regular/reoccurring roles for many television series, including the critically acclaimed “Slings & Arrows,” the Emmy® nominated “The State Within,” ABC’s “Rookie Blue”,and “Stargate: Atlantis”

Vincenzo Natali is the Hannibal director and storyboard artist who brought us some of the shows most memorable scenes: the five-way sex scene of Naka-Choko, the social worker in the horse from Su-zakana, Bedelia’s suggestively placed wine glass in Antipasto, Margot and Alana’s psychedelic body-blending love scene in “Dolce”, and the nightmare stag from “Primavera.” 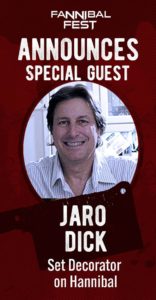 Jaro Dick is the amazing set decorator for all 39 episodes of Hannibal. It is hard to imagine our show without his elegant vision and symbolic art references. He infused Hannibal’s office, kitchen, and dining room with “American Gothic overtones via European Art Nouveau.”

They have plenty of events scheduled such as…

This year we have a few special events planned, including the very popular LOCATION BUS TOURS and the EAT THE RUDE DINNER. We’re also adding a special BREAKFAST WITH DADDY, a Kickstarter stretch goal, but we’re going to release a limited number of tickets to everyone. Please note all of these require an additional ticket purchase. Tickets will go on sale soon.

After a very successful Eat the Rude dinner last year, Janice Poon will once again be collaborating with the hotel’s Executive Chef to host a three-course gourmet experience themed on the show. From deceptively delicate finger foods to meaty mains and voluptuous veggies through to decadent desserts,the menu will be inspired by recipes from Janice’s Feeding Hannibal Cookbook.

Ever want to know how Abigail felt during her first meal with Hannibal? Well here is your chance! Janice Poon will be hosting a special Breakfast with Daddy, featuring the first meal Hannibal made for Abigail, ‘Hi-Life Eggs (Eggs in a Hole). Gather with your Fannibal Friends and start your convention morning the Hannibal way. 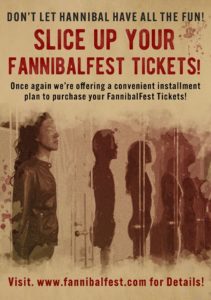 -See the complete schedule & more about the special events

-Read more about the guests

What’s Streaming this November on Shudder RISE OF THE SCARECROWS: HELL ON EARTH Begins Production