Nothing good comes from jealousy in today’s Sunday Scares feature…

In an act of jealousy, David hits his young bride demanding to know who’s the guy calling over the phone on their wedding night. Little does he know that his wife hides a secret so dark and dangerous that once it’s out nothing can ever be the same. 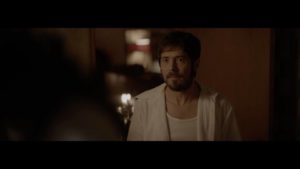 Let Her Go (short film) from Arie Socorro on Vimeo.

“Beyond Hell” Goes into the Dark Depths this December 4th!