An audience favorite of the horror film festival circuit, “The Laplace’s Demon” has recently screened at the Fantasia International Film Festival and the Arrow Video FrightFest 2018. It won multiple awards during the most recent edition of Screamfest in Los Angeles, including Best Score, Cinematography and Visual Effects.

The official synopsis reads: “Eight scientists working on a device that could predict the future are lured to a mansion on a deserted island by a mysterious professor interested on their findings. As they uncover their role in their host’s deadly experiment, a scale model with eight self-propelled pawns begins predicting their every move.”

Reel Nightmare Films will release the “The Laplace’s Demon” on iTunes, Amazon Prime Video and other digital platforms in the United States and Canada this Fall.

“The Laplace’s Demon” is inspired by the theory of the same name, which concludes that the universe is a huge clock where humans are nothing but its cogs: predictable and incapable of free will. “The Laplace’s Demon” has been described as “A Hitchcock-level of Suspense” by BlumHouse.com. 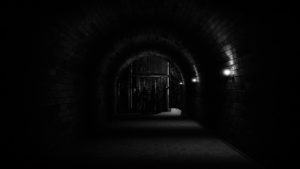 “With a suspenseful premise that successfully stays away from cheap thrills, and a highly distinctive look; The Laplace’s Demon is a frightening film you won’t forget.” Says Petri. “Reel Nightmare Films is honored to be releasing such a memorable project.”

Produced by Silvano Bertolin, Ferdinando D’Urbano, Duccio Giulivi, and writer/director Giordano Giulivi; “The Laplace’s Demon” will be released in the US & Canada later this Fall.

TEN MINUTES TO MIDNIGHT will World Premiere at Popcorn Frights!