Festival to Showcase World Premiere of Complete Deadwax Series,
the U.S. Premiere of Terrified, and Two Newly Announced Acquisitions,
The Night Shifter and The Blood of Wolves

Shudder, AMC Networks’ premium streaming service for thriller, suspense and horror, has announced its impressive lineup of originally produced and acquired films and series to be featured at this year’s Fantastic Fest, held in Austin, Texas, from September 20–27.

The centerpiece of Shudder’s Fantastic Fest programming is the world premiere of all eight episodes of audiophile nightmare Deadwax, an original short-form series starring Hannah Gross (Mindhunter) and Evan Gamble (Hap & Leonard), created by Graham Reznick (I Can See You, PS4’s Until Dawn) and executive produced by Reznick and Peter Phok (The House of the Devil, Stake Land). The 8-episode short-form series is slated to premiere on Shudder later this year.

Shudder has also announced the acquisition of North American rights for two Fantastic Fest titles: acclaimed Brazilian supernatural thriller The Night Shifter and wild Japanese crime saga The Blood of Wolves. Fantastic Fest will also host the U.S. premiere of the celebrated Argentine horror film, Terrified, which will launch on Shudder on October 11, one of a series of weekly original and exclusive premieres coming to the service now through Halloween.

In addition, genre film fans in New York, San Francisco and Denver will be able to screen Terrified and The Night Shifter at Fantastic Fest’s “satellite markets” at select Alamo Drafthouse locations, along with another upcoming Shudder exclusive, the SXSW noir hit A Bluebird in My Heart.

“Shudder is excited to be returning to Fantastic Fest, one of the world’s great showcases for genre films, bigger and better than ever before,” said Aurelie de Troyer, VP of Global Acquisitions for Shudder. “Not just to screen standout films from the global market and our newest originals series, but also to be on the lookout for mind-blowing future acquisitions to share with Shudder members.”

Written and directed by filmmaker, acclaimed sound designer and electronic musician Graham Reznick (I Can See You, co-writer of the PlayStation smash hit Until Dawn), Deadwax chronicles the hunt for a rare recording believed to cause madness and death to anyone who dares listen. Etta (Hannah Gross, Mindhunter), an audiophile and rare vinyl record dealer, is hired to find the only existing print of this notorious record. When Etta comes across Perry (Evan Gamble, Hap & Leonard), a police officer afflicted by the disc, she must race to unravel the deadly recording’s otherworldly origins. The series also stars Chester Rushing (Stranger Things), Dohn Norwood (Hell on Wheels), Ted Raimi (Ash vs. Evil Dead), Tracy Perez (East Los High) and Yuki Sakamoto.

A quiet street in a Buenos Aires neighborhood is disturbed by a series of mysterious and unsettling events, prompting an investigation from a soon-to-retire detective known for his interest in the occult. Directed by Demián Rugna.

The Blood of Wolves (coming to Shudder in 2018)

In the neon-soaked streets of 1988 Hiroshima, experienced detective Ogami Shogo (Kôji Yakusho, 13 Assassins) is forced to partner with greenhorn Hioka Shuichi (Tôri Matsuzaka) to investigate a routine disappearance case. Soon they’re in the midst of a full-blown yakuza war that threatens to destroy all that the two men hold dear. Directed by Kazuya Shiraishi (The Devil’s Path).

The Night Shifter (coming to Shudder in 2019)

A morgue attendant (Daniel de Oliveira) who can converse with the dead puts his loved ones in peril using his forbidden knowledge for vengeance. Directed by Dennison Ramalho (The ABCs of Death 2).

A Bluebird in My Heart (coming to Shudder in 2019)

Attempting to lead a quiet, reformed life, an ex-con (Roland Møller, Atomic Blonde) finds refuge in a motel run by a single mother (Veerle Baetens, The Broken Circle Breakdown) and her daughter Clara (Lola Le Lann, One Wild Moment). The peace and freedom found in this safe haven disappear when Clara is assaulted, forcing him to face his old demons. Directed by Jérémie Guez. 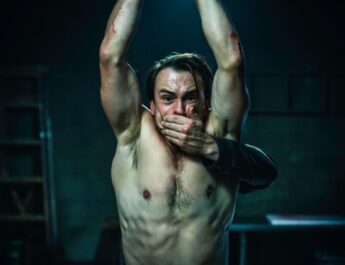