TERROR FILMS is set to release a new horror film every Friday in the month of October, in a special promotion aptly titled, FREAKY FRIDAYS! Each week a new film will be released in North America exclusively on Amazon Prime. An expanded release will follow on November 9th across multiple digital platforms including: iTunes, Vudu and Tubi TV; additional platforms will be added at a later date.

Check out the line-up below, including release dates, the official posters, and trailers!

First up from TERROR FILMS is THE CHAIR. Based on the Alterna Comics graphic novel of the same name, THE CHAIR follows the story of Richard Sullivan. Sullivan is a man on death row, struggling to escape a grisly fate. Pitted against a sadistic Warden and his crew of cruel prison guards, Sullivan is forced to confront his own horrifying past as he questions his own sanity.

To learn more about THE CHAIR: https://www.thechairhorror.com 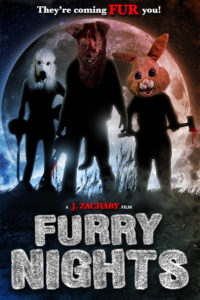 This film centers around a group of teens. They venture into the woods for a camping trip. When one of them accidentally mistakes a furry for a bear and tragically shoots him, the teens soon find themselves under a full scale and brutal attack led by the unforgiving Mr. Fox and his furry friends. Can the teens survive the revenge of the Furries? 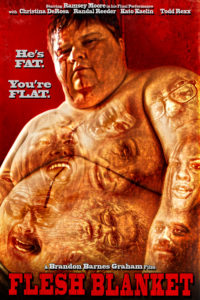 What began as a cutting-edge documentary meant to celebrate freedom of speech goes completely off the rails and turns into a big fat nightmare. This film will leave you hungry for seconds. FLESH BLANKET literally smothers you with terror and has been hailed as “possibly the best found-footage horror film ever!” Barnes Graham directs and stars in a true original horror film that completely revamps the mockumentary genre.

FLESH BLANKET takes a very dark turn. The morbidly obese Moore becomes increasingly angry at his cast, which is not taking the film seriously. Ramsey soon begins a descent into madness. Losing his mind, Ramsey’s disdain for his comrades and twisted obsession with women leads him on one humongous killing spree, no one will ever forget!. 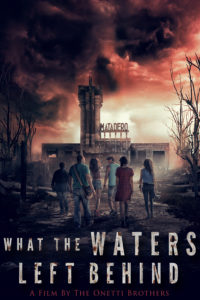 Ending the promotion is the award-winning film, WHAT THE WATERS LEFT BEHIND. This film made its World Premiere at the prestigious SITGES Film Festival, where directors (and Brothers) Luciano and Nicolas Onetti, took home the BEST PROMISING DIRECTOR’S AWARD. Since then, the film has garnered multiple awards and was released theatrically in Argentina’. Also, the film was picked up by Netflix for Latin America and the official trailer have garnered over 14 million views.

TERROR FILMS acquired North America rights on the film. WHAT THE WATERS LEFT BEHIND centers around Epecuén, one of the most important touristic villages of Argentina. Here, thousands of people would visit, attracted by the healing properties of its thermal waters. On November 10th 1985, a huge volume of water broke the protecting embankment and the village was submerged under ten meters of salt water. Thirty years later, the waters have receded exposing a bleak and deserted landscape. The residents never returned. However, a group of young filmmakers embark upon the ruins in order to film a documentary. Ignoring the warnings, they find themselves stranded in the abandoned village. Contrary to what they thought, they soon realize that they are not alone.

More on WHAT THE WATERS LEFT BEHIND, visit: http://black-mandala.com/what-the-waters-left-behind/

Two Teens with Down Syndrome Made Their Dream Zombie Movie