Here are some of the horror DVD/Blu-Ray releases for Oct. 2nd!

Blumhouse Productions welcomes you to the movement that began as a simple experiment: The First Purge. To push the crime rate below one percent for the rest of the year, the New Founding Fathers of America test a sociological theory that vents aggression for one night in one isolated community. But when the violence of oppressors meets the rage of the marginalized, the contagion will explode from the trial-city borders and spread across the nation.

BRAND NEW HD RESTORATION IN 4K! An investigative journalist takes a stab at the supernatural. This unforgettable first entry in the Night Stalker series introduced the world to the quirky reporter with a penchant for the paranormal and became one of the top-rated TV movies of all time. Investigating a series of Las Vegas murders, Carl Kolchak (Darren McGavin, The Night Strangler) discovers that each victim has been bitten in the neck and drained of blood. Though Kolchak’s outlandish theory about the murders gets him nowhere with the police, his initiative to apprehend the killer himself gets him into hot water… with a modern-day vampire. The great John Llewellyn Moxey (Nightmare in Badham County) directed this Dan Curtis (Burnt Offerings) production featuring Carol Lynley (The Poseidon Adventure), Simon Oakland (The Hunting Party), Ralph Meeker (Big House, U.S.A.), Claude Akins (A Man Called Sledge), Charles McGraw (The Narrow Margin), Kent Smith (The Spiral Staircase), Elisha Cook Jr. (I Wake Up Screaming) and Larry Linville (TV’s M*A*S*H). Teleplay by legendary sci-fi/horror writer Richard Matheson (The Incredible Shrinking Man).

BRAND NEW 4K RESTORATION! Supernatural phenomena, baffling murders and offbeat humor mark this second Night Stalker offering with a great cast and suspense so palpable, it’ll feel like a presence right there in the room with you. Surfacing in Seattle, Kolchak (Darren McGavin, The Night Stalker) uncovers another maddening mystery: Every 21 years—for the past century—a serial killer commits a spree of murders, drains his victims’ blood and then quietly disappears. But Kolchak is onto this monster and is about to discover a shocking underground lair… an army of rotting corpses… and the ageless madman behind it all. The great Dan Curtis (Burnt Offerings) produced and directed this highly-rated TV movie written by legendary sci-fi/horror writer Richard Matheson (I Am Legend). The stellar cast includes Jo Ann Pflug (Scream of the Wolf), Simon Oakland (Bullitt), Scott Brady (He Walked by Night), Wally Cox (TV’s Mister Peepers), Margaret Hamilton (The Wizard of Oz), John Carradine (House of the Long Shadows) and Al Lewis (TV’s The Munsters).

Welcome to an America where all crimes are legal for one night a year in The Purge 4-Movie Collection. A family finds their home under siege by a mob that will stop at nothing to kill them in The Purge. The Purge: Anarchy finds five strangers banding together to take down the bloodthirsty gangs who pursue them. When a presidential candidate threatens their rule in The Purge: Election Year, the government targets her for assassination on Purge Night. The prequel The First Purge welcomes you to the movement that began as a sociological experiment in one isolated community, but spread across the nation. Set in a future only a few years away, The Purge 4- Movie Collection is an explosive series of pulse-pounding thrillers where anyone can get away with murder!

From acclaimed musician and filmmaker Rob Zombie comes a raw and unrated re-imagination of the highly successful and terrifying Halloween legacy. In 1978 the original slasher film introduced fans to the bloody rampage of psychotic horror icon Michael Myers. The new chapter will surprise both classic and modern horror fans with a departure from prior films in the Halloween franchise. Audiences should brace themselves for unprecedented fear as Zombie turns back time to uncover the making of a pathologically disturbed, even cursed child named Michael Myers.

Your best friend has just been infected with a horrifying virus that will soon turn her into a rabid, rampaging cannibal zombie. Do you: a) try to save her? Or b) kill her before she kills you? That’s the nightmarish scenario six students find themselves facing when their celebratory camping trip goes terrifyingly wrong. One by one, each falls victim to the “feral”, disease, until only Alice (Scout Taylor-Compton, Rob Zombie’s Halloween) and Jules (Olivia Luccardi, It Follows) two girlfriends testing the waters of their new relationship, are left standing, armed with a shotgun and holed up in a remote cabin. They’ve got a hell of a fight before them if they hope to survive in this grisly blend of survival thriller and contagion shocker.

A sleepy seaside town in England is about to learn the true meaning of Vengeance. As the residents gear up for the annual Halloween celebration, little do they know that their seemingly perfect town masks a guilty secret. One year earlier a group of vigilantes took matters into their own hands when notorious criminal Jack Cain escaped conviction. After torturing and killing Cain, they buried his body in the local cornfield and made a pact to never speak his name again. Now, on the day when the veil between the living and dead is at its thinnest, a mysterious apparition begins stalking the land and dishing out brutal retribution to the vigilante group. So begins the Legend of Halloween Jack.

Haunted by a horrific childhood trauma for twenty years, Holly struggles with vivid, disturbing nightmares that leave her detached and unable to live a normal life. Then an old friend recommends Holly meet with charismatic cult leader Bruce O’Hara, and she is led on a twisted journey of waking dreams that will begin to unravel the fabric of reality and reveal the truth about Holly’s family…a terrifying destiny.

A couple goes on a weekend getaway to a cabin in the woods. What starts as a romantic weekend turns into a nightmare when they discover they are being watched by the cabin’s voyeuristic owner.

Remmington (Joshua Winch) has escaped the evil cabin, but now the evil continues to follow him wrecking havoc where ever he goes as Chloe (Katelynn Newberry) and Revel (Shanon Snedden) look for a missing sister that went to the evil cabin in the previous installment. The two meet Vincent, a failing tv show host, to help psychicly contact the missing sister. That’s when a gunshot rings out in the night and the three meet Remmington. Now they all must battle for their lives against the evil that pursues Remmington to once and for all lock the evil away for good.

Five graduate students are conducting a study to prove the theory that once you’ve passed 200 hours without sleep, you will never need sleep again. As the hours tick by and their struggle to stay awake intensifies, they each start to have strange and unsettling experiences. Visions from the past, violent impulses and terrifying waking nightmares begin to take hold and turn this experiment into a desperate fight for survival.

“A New Holiday Horror Slasher.” Reunited for the holidays, a group of friends raised together in a troubled Louisiana orphanage are stalked by a killer from Christmas Past.

A gunslinger, a vengeful ex-slave, and a runaway board a midnight train to Atlanta. They discover that the train is haunted by a sinister force, and must fight to survive the night. 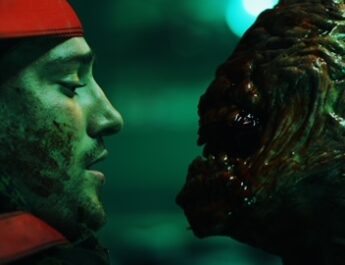 DEATH VALLEY on DVD and Blu-Ray on May 17 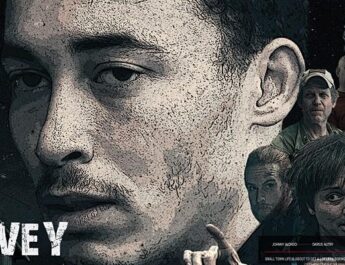 HARVEY has Arrived on VOD from Midnight Releasing