Swedish-based filmmaker Johan Bodell talks about teaming up with the Americans for the new horror feature “The Cabin,” out on release through High Octane Pictures.

-PH: Congrats on The Cabin. Why did you decide this was the perfect film to make as your debut?

-Johan: Thanks! I’ve been working as a production coordinator and assistant director on various shows here in Sweden. And many of the talented filmmakers there all talked about their vision to make a feature film, but they all had excuses. They didn’t get the perfect funding or the perfect script. We decided to take a different approach. Before we had a script in place, we decided that we were going to shoot a year later, no matter what. Among our friends and colleagues, we knew a lot of talented people that could help us out, and in worst case scenario we would shoot it ourselves with no resources.

One way of making it “doable” was to shoot it in my hometown of Kilafors, Sweden. Almost three hours north of Stockholm. There we knew a lot of people that could help us out. Me and Erik (screenwriter) went on a road trip there and scouted different locations and one of the stops was at my family’s farm. There we had the cabin on one side of the lake, and an empty farmhouse on the other side. From there the built the story, and horror felt that it would suit the location the best.

Once we got started on the script I received two scholarships, then we suddenly had some funding to use in the production. And from there the project grew. We could bring on the American actors to play the lead roles, the cinematographer Charles Doan who I had worked with before, editor in the Philippines and composer in Santa Barbara. It grew into an international feature collaboration. It’s so cool now looking back at the journey the film had taken, from the first initial talks to now having it released in the US by High Octane pictures.

-PH: What’s it about, sir? How would you describe the tone?

-Johan: I would describe it as a classic horror story. Harry (Christopher Lee Page) and Rose (Caitlin Crommett) are on their way to Harry’s family’s cabin, and things don’t really go as planned. The tone is kind of unique I would say. It’s an underlying threat all the time. Even a stop at a gas station on the way can get underneath your skin, you never really know what will come from that meeting.

And we’re always close to nature. You really feel how isolated the place is, they go deeper and deeper into the woods. So, using nature as another character, something that isn’t just a pretty backdrop, but also really gives the characters a physical thing to play against.

We mostly used natural lights when filming this. And that wasn’t just an artistic choice, we also had the limitation that the cabin doesn’t have any electricity. We had two old 1k lights to work with and I think Charlie (DP) did an excellent job of creating that special feeling in the cinematography.

I know he mentioned on the first day we went out there that it was something special with the light and the texture of the surroundings. Wallpapers, woods and barns, everything had a texture to it.

I might be impartial here but I think this is one of the best-looking horror films in later years. Especially considering what we had to work with.

-PH: You previously directed shorts. Do you find that short films that are from the horror genre seem to have longer legs than those that fall outside of the genre?

-Johan: I’m not sure. I haven’t seen that many horror shorts. The shorts I made earlier with the same DoP and composer have also included its fair share of blood, and it felt only natural to have some really gruesome scenes in this one as well.

Working in the feature format was a different challenge than doing shorts, of course. But it felt only natural to take that step in my career. But it’s a different way of thinking.  During production, I worked as I always do. But it was during the post-production that it really struck me on how many decisions I had to make. It was exhausting but also gave a taste to do it again. I directed another short-film this summer and I could really miss many of the aspects of the feature-length format.

-PH: How much does a US release mean for the film – and in particular, you and the filmmaker?

-Johan: It’s one of my life goals to make a feature film and get it released in the US. As a filmmaker, it really opens doors for the next project. We’ve proved that we can do and are ready to make more feature-length films.

-PH: Tell us about the cast, if you can?

-Johan: Alec Trachtenberg (Producer) arranged the casting of the film in Los Angeles. We cast Christopher Lee Page and Caitlin Crommett and that’s a decision I’m still very happy with. Not only did they do an excellent job on the screen, but we also had an amazing time behind the camera as well.

They really brought another dimension to the scenes that I didn’t see at first. Chris had also some experience in stunts, which made it a whole lot easier for me when it came to the action bits. I know how I want it to look and feel, but he made it possible to actually do it on set.

For the part of the villain, I went with Erik, who also wrote the script. That’s something we talked about from the beginning and it turned out very well. He had just starred in another feature film and he’s a nice guy, but have something creepy over him. A lot of people have come up to me after looking at the film and told me that if they ever met him in on the subway, they would run the other way.

-PH: We’d be remiss to ask you about your next film….

-Johan: We’re currently working on a new project that I hope we can announce and get started on at the beginning of 2019. We learned so much of doing The Cabin that we now would like to test out on a new feature. And yes, it will probably be in the horror genre again. 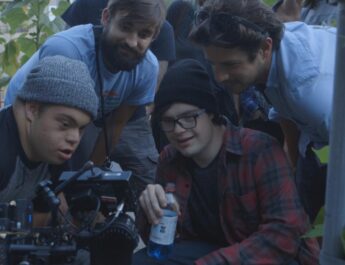 Two Teens with Down Syndrome Made Their Dream Zombie Movie