Here are some of the horror DVD/Blu-Ray releases for December 18th!

The evolution story of Marvel’s most enigmatic, complex and badass character – Venom! Eddie Brock (Tom Hardy) is a broken man after he loses everything including his job and fiancée. Just when his life is at its lowest, he becomes host to an alien symbiote which results in extraordinary superpowers – transforming him into Venom. Will these powers be enough for this new lethal protector to defeat great evil forces, especially against the far stronger and more weaponized symbiote rival, Riot?

When a young boy accidentally triggers the universe’s most lethal hunters’ return to Earth, only a ragtag crew of ex-soldiers and a disgruntled scientist can prevent the end of the human race.

Debbie, Curtis and Steven may seem cute as buttons. But their angelic facade conceals the wicked, murderous streak given to them having all been born under the same solar eclipse. With the grown-ups around them blissfully unaware of their little darlings homicidal tendencies, the evil brats begin to bump off the adults one-by-one. By gun. By arrow. By cake. Bye-bye!

Three small-time thieves specializing in home burglary pose as caterers for a fancy dinner party at the Malibu mansion of the extravagantly wealthy Dawson family. But their plan for the perfect heist goes horribly wrong when they discover that the Dawsons and their guests are actually a support group of recovering serial killers. When one of the addicts can’t resist the urge to attack, this simple cash grab becomes an all-out battle for survival where no one is safe.

While taking a road trip, a young couple takes a wrong turn on a highway and decides to stop at a diner for a meal. Little do they know that their choice of a simple hamburger will have such horrible consequences. Their journey soon becomes a harrowing story of survival and escape as they are kidnapped by local farmers with nefarious intentions… On their farm, humans are the main dish.

Take a dash of Tarantino, a splash of Coen brothers, a metric ton of pretzel-logic self-awareness, and a fast-paced series of humorously violent misadventures, and you re halfway to grasping the magnificent German madness of this bizarre import. Hunting down the murderer of their families in a near-future Berlin, a gang of lowlife characters all want revenge on each other, but along the way they must contend with a myriad of wicked fairytale types assassins, madmen, a blood-covered angel, and an electric-powered superhero all apparently come to life through a screenplay written by a demented but clueless dentist. Must be experienced to be believed, and guaranteed to twist your mind.

Stan Harris is a procrastinating horror novelist who gets a call from his publisher warning him that he’s only got until the end of the night to complete his latest work. As paranormal events start unfolding around him, Stan finds all new inspiration, and danger, while completing his stories.

Farmer Tony Maio turns into a fierce mutant because of a meteorite impact on Earth. Disguised as a scarecrow in order to hide his appearance, he starts to kill people to satisfy his bloodlust.

A Japanese Artist visiting the Highlands of Scotland, is about to find out that one wrong word can get you into a lot of trouble. Especially when not everyone in Scotland, is friendly. When THE ARTIST crosses paths with the disgusting GAMEKEEPER – only one of them will leave the Highlands alive.

Bring the feel of the Drive-in home with this GrindHouse anthology. Featuring three tales of horror delivered in a format that’s sure to quench the thirst of any fan of the 70’s and 80’s Drive-in classics. Bonus features include: Movie Trailer 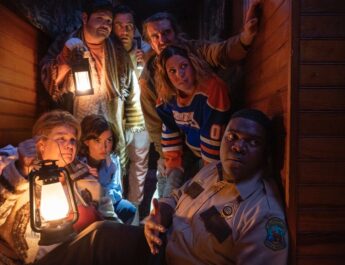 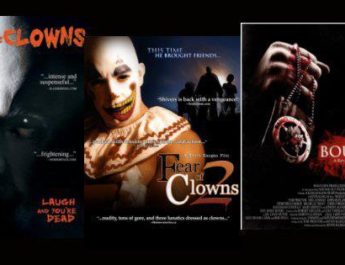