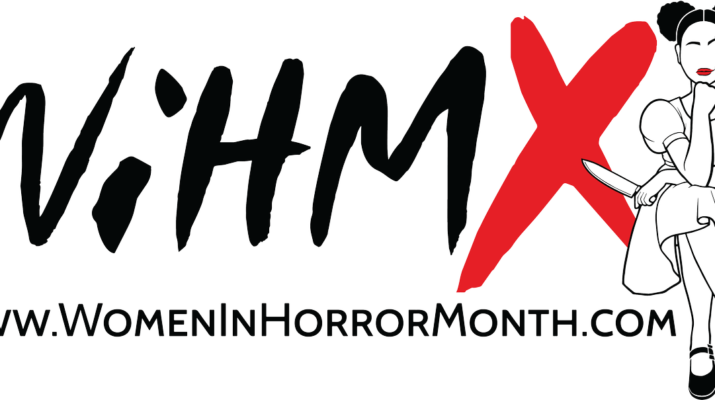 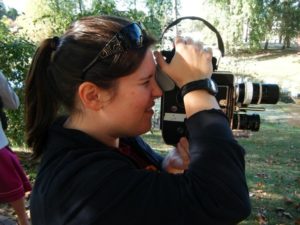 -Amy: It started pretty early. As a child I used to read the Scary Stories to Tell in the Dark books (SIDE NOTE: the first poster for the film features the one character that terrified me the most – don’t mock your scarecrows, people!), plus anything I could find about witch hunts and vampires. The librarian must have thought I was a weird little kid. On TV, I used to watch Tales from the Crypt and I was obsessed with The X-Files. And then of course there was Buffy the Vampire Slayer, which felt like a show tailor-made for me. I think that having Scully and Buffy as horror heroines so early on in my exposure to the genre really shaped my interest because I saw the very best of what it meant to be a women in horror. These were female characters with agency, and complex interior lives, who turned the tables on the forces of evil. And I was hooked.

-Amy: I never really thought that working in film was something that real people did. It all seemed so far away and impossible. I earned a degree in Classics in college, and was prepared to become a Latin teacher, but I finally had to admit to myself that just wasn’t what I wanted to do. So, I went back to school for film and my writing just naturally tended toward comedy and horror. Probably because I was such a fan of Buffy and the way I really first started learning about storytelling was through watching that show and listening to the episode commentaries.

-Amy: It’s vitally important for visibility. When people like Jason Blum say they just don’t know any women interested in making horror movies, that’s a kick in the teeth to all the talented women out there who love horror and are struggling to get their projects made. We’re here! We want to work! Women in Horror month gives us a great opportunity to shine the spotlight on the women in horror community, and hopefully studios will notice and actually start to hire us.

-Amy: I think women are starting to get more complex, interesting characters to play. For a long time, in the majority of films, even if you were playing the “final girl,” there wasn’t a lot for an actress to dig into (there are exceptions of course and they are iconic characters of the genre). Now we’re starting to find more consistently great roles for women that allow them to do more than just scream and run. I think what I’m getting at is that roles for women in films like Hereditary or A Girl Walks Home Alone at Night are now becoming less of the exception and more of the rule.

-Amy: Hopefully, we’ll see studios really start hiring more female directors and giving them decent budgets and marketing. I think about a recent interview I read with Karyn Kusama about the marketing for her film, Jennifer’s Body, and how the studio basically screwed it up so the film never found its audience. So I’m hoping that in addition to hiring female directors, studios will also provide the support their films need on the PR end by actually listening to what they have to say. There’s nothing more frustrating than when a great film by a female director under-performs seeing Hollywood go, well, I guess no one wants to see something by women, about women. It’s like, no, actually, you just didn’t figure out the right way to reach the intended audience. And of course I’m simplifying because there are many reasons a film might under-perform, but I guess what I’m trying to say that I’m hoping that the future for women in horror is not just studios hiring more women, but also actually supporting and nurturing those women and their films.

-Amy: Favorite final girl has to be Ripley. And I feel like I should specify that I’m mostly thinking about Alien and Aliens when I talk about Ripley. In Alien, we see that she’s smart, tough, good at her job – in fact, if they had listened to her, there’s a good chance they could have nipped the whole alien problem in the bud. And then in Aliens, we get to see how traumatized Ripley is from her first encounter with the aliens, but she doesn’t let that fear stop her from being a badass and getting done what needs getting done. I just love her.

Favorite female villain is probably Julia from Hellraiser and Hellraiser II. While she could easily fall into a stereotype of the evil stepmother, she is more complex than that. She is remarkably self-assured and clear in her goals and in charge of her own sexuality. She knows what she wants and she doesn’t apologize for what she has to do to get that…which is a quality I really like to see in female characters because women are so often conditioned by society to feel bad about what we want, and to put everyone else’s needs above our own. Anything to be perceived as nice and accommodating. Julia doesn’t care about any of that. I mean, she’s a terrible person, but I do kinda root for her. She’s a much more interesting character than Kristy that’s for sure.

-Amy: I just directed a mockumentary horror-comedy that we shot in six days called Hunter’s Weekend, which is currently making the festival rounds. This month it screens in LA at the Hollywood Reel Independent Film Festival, and in Roanoke, VA at the Mysticon Independent Film Festival. The film follows park rangers, Lyle and Victor, who just want their elite, invitation-only hunter’s weekend event to go well. Unfortunately, hunters start turning up dead, so they must race to find the killer before they become the next victims. If that sounds interesting, please don’t hesitate to follow our social media or check out our website for all the latest updates: Facebook, Twitter, Instagram, Website. The story has some fun twists and turns, and audiences have been responding really well to the comedy, so we’re very excited to continue screening it around the country and once the festival run is done to make it available on streaming services. You can watch the trailer here.

We would like to thank Amy Taylor for taking the time to answer our questions, but more importantly for her contribution to horror!

“The Grindsploitation Trilogy” Now Available on Blu-Ray Courtesy of Troma