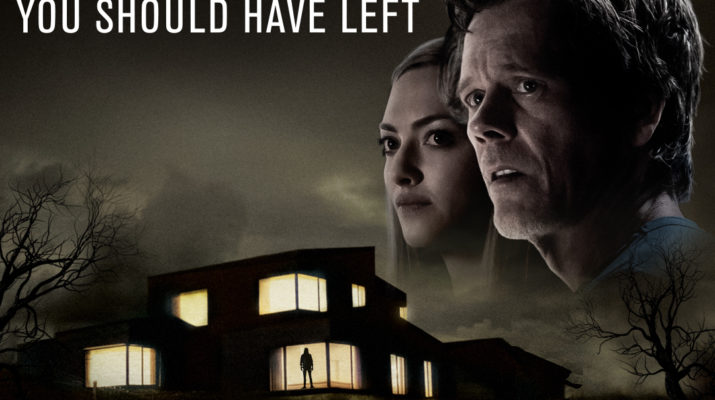 Here are some of the horror DVD/Blu-Ray releases for July 28th!

In this psychological thriller from Blumhouse Productions and legendary screenwriter David Koepp (Jurassic Park, Mission: Impossible, Panic Room), Kevin Bacon and Amanda Seyfried star as a couple seeking a restful vacation in a remote home in the Welsh countryside. What at first seems like a perfect retreat distorts into a terrifying nightmare when reality begins to unravel, dark episodes from the past resurface, and a sinister force in the house refuses to let them leave.

“A nightmare come true for fans of seriously scary movies!” – Joe Leydon, San Francisco Examiner What a house! It’s all steel and glass and elegance – and it all belongs to Arthur Kriticos and his family as an unexpected inheritance. You could say it’s their dream home. Especially if the dreams are nightmares. Awesome ectoplasmic specters populate Thirteen Ghosts, an effects-rampant remake of the 1960 William Castle haunted-house film from producers Gilbert Adler, Joel Silver and Robert Zemeckis, who conjured up the equally terrorific House On Haunted Hill (1999). Tony Shalhoub leads a cast that includes Embeth Davidtz, Matthew Lillard, Shannon Elizabeth, Rah Digga and F. Murray Abraham. The house itself is a design marvel and a mysterious puzzle-cube whose eerie corridors, sliding walls, spinning floors and phantasmic fiends may allow no escape.

Based on Stephen King’s bestselling novel of the same name, The Outsider begins by following a seemingly straightforward investigation into the gruesome murder of a young boy. But when an insidious supernatural force edges its way into the case, it leads a seasoned cop and an unorthodox investigator to question everything they believe in.

Workers clock in for their shift … and clock out for good! From master storyteller Stephen King (Pet Sematary) comes his most terror-filled tale yet … When an abandoned textile mill is reopened, several employees meet mysterious deaths. The link between the killings is the hour: all occurred between 11 p.m. and 7 a.m. – the Graveyard Shift. The sadistic mill foreman has chosen a group to clean up the mill’s rat-infested basement. But what the workers find is a subterranean maze of tunnels leading to the cemetery – and an unimaginable horror that comes alive in the dead of night …

For her entire life, the cult she was born into has been all that teenage Selah (Raffey Cassidy) has known. Along with a band of similarly cloistered young women she lives seemingly unstuck in time, cut off from modern society in a remote forest commune presided over by a man called Shepherd (Michiel Huisman), a controlling, messiah-like figure with a frightening dark side. But when her insular world is rocked by a series of nightmarish visions and disturbing revelations, Selah begins to question everything about her existence—including her allegiance to the increasingly dangerous Shepherd. Awash in images of primal, dreamlike dread, this provocative fable is a haunting vision of adolescent awakening and revolt.

Count Dracula has converted his castle into a tawdry tourist attraction as a means of luring in unsuspecting visitors and draining them of their blood. But his dream is to find the perfect blood type needed to resurrect his bride, Vampira, back to the world of the undead. When one of his latest guests turns out to have blood that’s a perfect match, Dracula is over the moon, until a lab error results in an unexpected change to beloved Vampira: she’s been unintentionally transformed into a soul sister! Determined to restore his wife’s original skin tone, Dracula travels to London in search of the girl responsible for the mishap, much to Vampira’s dismay.

This light-hearted, metaphysical sci-fi horror film is a bizarre celebration of death, resurrection and insanity. Think “”Harold and Maude”” meets “”Groundhog Day”” as directed by Alain Resnais (Last Year at Marienbad). Richie is a suicidal young man who, every time he kills himself, finds himself very much alive but with a dead body of him in his apartment. His sister comes to the rescue, but as the bodies pile up, the pair think that a vagina-like opening in Richie’s bedroom might hold the answer.

Brad and Ashley are a young American couple travelling Europe after completing their college degrees. They drive through German countryside where they visit the famous Neuschwanstein Castle. Brad suddenly hears a large bang from the rear of the vehicle. He exits to find an unidentifiable woman stabbed in the back of the head with a dagger. Brad rushes back to the car attempting to start the vehicle but it mysteriously loses power. As they wait within the car, the radio turns on playing 1940’s german opera. This triggers Ashley to experience flashes of the future. They leave the car and find an isolated house haunted by a deceased Nazi family. Brad and Ashley become trapped within the house, tormented by the deceased family who kill Brad, his body snapped and manipulated into a Nazi swastika. Now alone Ashley finds herself wandering the German landscape desperate for help. She sees a light in the distance and heads towards it, only to find she is mysteriously back at the same house face to face with the German SS Officer. Ashley communicates with the Officer’s Wife who directs her to a room playing footage from the late 1940’s. The footage reveals the true horrors of what happened within the house, showing the German SS Officer killing his wife and two children after finding evidence that they are not pure aryan race. Ashley is cornered by the German SS Officer who places his walking stick over her lips sucking the air from her body causing her to pass out. Ashley wakes to find her lips have been sewn shut. She gathers her strength and runs out of the house where spots a car in the distance. She runs to the rear of the vehicle and bangs to get the attention of the two occupants but is stabbed in the back of the skull. It is then revealed that the occupants of the vehicle are in fact Brad and Ashley.

The Carnage Collection is Point & Shoot Films first feature-length film. The horror/comedy anthology features several short stories of violence, gore, sexual perversions, and torture. With multiple segments, including ‘Stuffed,’ about one girl’s obsession with her best friend and her stuffed toys; ‘Slay Bells,’ about everyone’s favorite murderous holiday fat man; ‘The Day The Clown Cried Blood,’ which explains why you should never say “I hate clowns,” … and more. This is the standard-edition DVD, and features a stills gallery and blooper reel. Region free playback.

Charts the early years of HandMade Films, seen through the eyes of the filmmakers, key personnel, and the man who started it all: former Beatle George Harrison.