Here are some of the horror DVD/Blu-Ray releases for March 12th!

Pulse-pounding action and spine-chilling thrills put the bite into this sci-fi shocker starring Ally Sheedy (X-Men: Apocalypse, The Breakfast Club) and Lance Henriksen (Pumpkinhead, Aliens). When an ambitious news journalist (Sheedy) breaks into a genetic research facility, she uncovers the biggest story of her career and unleashes the lab’s most dangerous experiment: Max a genetically enhanced guard dog with a vicious killer instinct. Superior sight, hearing, strength, and intelligence make him faster, stronger, and smarter than almost any other animal alive and deadlier. Without the neuropathic drugs needed to curb his aggressive nature, his predatory urge runs out of control … and once he tastes blood, nothing can stop him.

Reed (Christopher Abbott) sets off on a business trip and kisses his wife and baby goodbye. But in lieu of a suitcase filled with clothes, he’s packed a toothbrush and a murder kit. He meticulously plans everything out. He checks into a hotel and plans to kill an unsuspecting victim in order to quench his devious impulses. Reed gets more than he bargained for with Jackie (Mia Wasikowska), an alluring call girl who arrives at his room. First, they relax and get in the mood, but when there’s an unexpected disruption, the balance of control changes between the two and a feverish nightmare unfolds. Based on the critically acclaimed cult novel by Ryû Murakami, Director Nicolas Pesce (The Eyes of My Mother) blends psychological horror and a neo-noir style that critics are calling “Brutal, sexy and disturbing.”- Adam Patterson, Film Pulse

A group of youngsters arrive at a snow-covered house under the guise of participating in a ground-breaking new experimental film. With the entire property fitted out with cameras, their every move will be recorded. But when the house locks down, trapping the youngsters within, it soon becomes clear that something sinister is afoot. Scream – you re on camera…

Drew has an identity problem. Every few days, he has to shape-shift, or face a painful death. He has to find someone and make a copy. He takes everything: their looks, memories, hopes and dreams. Their entire life. He becomes them, and they die horribly. Lately, the changes are becoming more frequent. Facing his imminent death, Drew sets out on one final blood-soaked mission. BLU-RAY BONUS FEATURES: Commentary with director/writer/producer Justin McConnell — Commentary with actors Lora Burke, Jack Foley, Sam James White, Steve Kasan, and writer/director Justin McConnell — Change and Adapt: The Making of Lifechanger (104min) — Deleted Scenes with optional director’s commentary (25min) — Original score by Sean Motley (BD-ROM and Link) — Trailers, Still Gallery, and Storyboards

Two unlikely heroes team up to solve an ongoing killing spree targeting clients and coworkers of a t-shirt printing business.

GOLDEN TEMPLE AMAZONS: A woman, raised by an Amazon tribe after they killed her parents, seeks revenge on the tribe for their deaths by joining an expedition looking for the tribe’s secret golden temple.

DIAMONDS OF KILIMANJARO: An expedition team penetrate deep into the jungles of darkest Africa in search of treasure and a long lost girl who has now grown up to become the statuesque goddess leader of a cannibalistic Mabuto tribe.

A new drug is taking over the streets, coating them in blood, vomit, and other less savory fluids. The six eye-opening stories in this anthology reveal the truth about this new white menace.

A band of adventurers on the search for a reported fortune in buried treasure, investigate many islands to the south of the Philippines and discover an unknown civilization that may be descendants of the lost continent of Atlantis. These half human, half fish creatures, have pearlized eyes and are able to stay underwater for great lengths of time…a bonus because all of their important rituals, including love-making, take place on the sea bed. But this lost tribe needs outsiders for mating and when they capture the greedy band of fortune hunters, the adventure becomes a fight for treasure! Bonus features include: Original Theatrical Trailer, Video Interviews with John Ashley, Leigh Christian and Sid Haig, Full commentary track by filmmaker, Howard S. Berger and filmmaker Pinoy film historian, Andrew Leavold , Original 30 & 60 second TV Spots

She Wolf is a serial killer who traps her men in the subway in Buenos Aires. She seduces, has sex with them and kills them. But one of those men is a police officer who is investigating her crimes. Running away from him, she meets a dealer with whom she starts a relationship. This romance unravels a war between her three personalities: the monster woman, the sensual woman and the human woman who can still love.

Simone, a wannabe vampire who’s about to get evicted from her apartment, interviews several weirdos, including psycho vampire hunter Marcus. Her brother, Sam convinces her to allow ditzy Ashlee to be her new roomie. Convinced that Simone is a real vampire, Marcus sneaks into her apartment and tries to kill her, but ends up getting attacked and bitten by Ashlee, who’s a real vampire! While the girls are away, Marcus kidnaps and takes Sam to an abandoned factory where he holds him hostage in exchange for Ashlee, who he intends to slay. Simone and Ashlee get their hands on Marcus’s friend, Vin and his cousin-in-law, Sal. They meet Marcus at the factory and try to swap prisoners, but Vin’s friend Brinkhouse appears and causes Ashlee to suck the silver out of Sal’s blood, allowing him to turn into a werewolf! Todd tries to record the werewolf having sex with her for his porn website, but Marcus joins up with Simone and the gang and end up turning the table on Todd who gets it in the end!

Filmmakers document the producing an independent found-footage horror film that becomes a real-life horror movie. After securing a cabin in the woods location, Tyler and Sam hit gold when they cast the perfect actor to play the psychopathic antagonist of their film. Maybe he was a little too perfect. Bonus features include: closed captions (english)

Nightmares can come true! Enter a world where ghosts, monsters and other dreadful creatures are a reality and strange events are just an everyday occurrence. Welcome to Strange Events. Strange Events delves into the paranormal, the bizarre and downright insane. No place is safe in a feature film follow up to the hit original which Dread Central called Sleek, stylish and disturbing as hell. 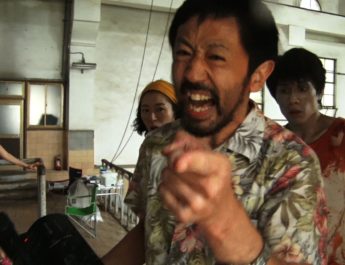