The World Premiere of

A new play by David Pinner, the prolific and celebrated author of RITUAL, the novel that inspired cult film THE WICKER MAN.

Edred is a thousand-year-old bisexual Anglo-Saxon vampire, who slept with Shakespeare but never bit him. Breaking all of Bram Stoker’s laws, Edred loves garlic and crucifixes and resides in a village church, where he is one day confronted by two vampire-hunting gap-year students, who help him to explore a millennium of world history. Yet the surface action belies the true realities of the situation. As Pinner says: ‘Things are rarely what they seem’, and here nothing is.

Combining ironic humour with mystery, suspense and insidious menace, EDRED, THE VAMPYRE is by turns startling, haunting and revelatory.

Before becoming a full-time writer, David trained at RADA, and has acted in many stage and television plays. He wrote his first novel, RITUAL, in 1967, while starring in THE MOUSETRAP in London’s West End. He has had several plays produced in London, including FANGHORN, starring Glenda Jackson (Fortune Theatre), LUCIFER’S FAIR (Arts Theatre), THE POTSDAM QUARTET, with Clive Swift, (Lyric Hammersmith and Jermyn Street Theatre), THE LAST ENGLISHMAN, with Kate O’Mara, (Orange Tree), SINS OF THE MOTHER, (Grace Theatre), LENIN IN LOVE, with James Faulkner (New End Theatre) and OH, TO BE IN ENGLAND (Finborough Theatre). His other produced plays include THE TEDDY BEARS’ PICNIC, with Philip Madoc as Stalin and SKIN DEEP (Chester Gateway), DICKON with Joseph O’Connor (Queens Theatre, Hornchurch), THE DRUMS OF SNOW and LIGHTNING AT A FUNERAL (Stanford Theatre, California), HEREWARD THE WAKE (Key Theatre, Peterborough), SCREWBALL (Theatre Royal, Plymouth), REVELATIONS (Grinnell, Iowa), ALL HALLOWS’ EVE, (Hong Kong Academy of Performing Arts), and MIDSUMMER (Brehmer Theatre, New York). His screenplays for television include THE POTSDAM QUARTET (BBC), THE SEA HORSE and THE VERDICT IS YOURS (Granada), and JULIET AND ROMEO (Sud Deutscher Rundfunk). His plays broadcast on BBC radio include DICKON, LIGHTFALL, RICHELIEU, THE LAST ENGLISHMAN, TALLEYRAND: PRINCE OF TRAITORS, THE EX-PATRIOT, KEIR HARDIE and FANGS AINT WOT THEY USED TO BE. The sequel to his cult novel, RITUAL is THE WICCA WOMAN, published by Endeavour. His other novels are WITH MY BODY (Weidenfeld and Nicholson) and THERE’LL ALWAYS BE AN ENGLAND (Anthony Blonde).

This is not Martin’s first run-in with Vampires. His one-man show DRACULA PART I: JONATHAN HARKER’S JOURNAL is touring the country for its sixth year in 2019. Martin runs That’s My Cue Productions and has adapted and starred in two other one-man shows with them: THREE MEN IN A BOAT, on tour every summer, and A CHRISTMAS CAROL, which has a film release scheduled for later this year. Aside from one-man shows, Martin’s acting career has covered everything from pantos to feature films and Shakespeare. Some recent roles include Malvolio in TWELFTH NIGHT (Scena Mundi Theatre Company), Mr Frazer in the feature film DESTINATION DEWSBURY, Henry Bollingbrooke in RICHARD II (Scena Mundi), Orson Welles in ORSON WELLES: THE NIGHT WE SCARED AMERICA (Kaos Productions), Cardinal in DUCHESS OF MALFI (Scena Mundi) and Corvino in VOLPONE (Scena Mundi). www.thatsmycueproductions.com, www.spotlight.com/7779-5619-1562 Twitter: @Martin_Prest

Originally from Liverpool, James trained at Drama Studio London on the BA professional acting course graduating in July of this year. He moved to London to pursue his passion for acting and he is loving every minute of it. Professional Credits include: RHETORIC at the Bread and Roses Theatre. Credits whilst training include: SPECULATORS, MACBETH, BUS STOP, THE HOMECOMING, CONSTELLATIONS. www.spotlight.com/interactive/cv/18/M174840.html

Sarah began mounting her own work as a performer in 2013 and has worked consistently as a producer alongside her acting career ever since. She is a founding member and lead producer of And Tomorrow Theatre Company, whose inaugural production, DEATH OF A HUNTER, premiered at the Finborough Theatre and transferred to The Other Place at this year’s Brighton Fringe Festival. She is delighted to be back at The London Horror Festival having performed in Burn Bright Theater’s production of FRANKENSTEIN at the Old Red Lion last October. Sarah has co-produced four showcases of her own work as a performer to date: MY ROMANTIC HISTORY (Old Red Lion), TREE HOUSE (Brewhouse Theatre Taunton and touring), the title role in MADAME BOVARY (Hope Theatre) and Nell Gwyn in ORANGES & INK, which enjoyed a sell-out two week run at The Tristan Bates Theatre in March, transferring to the HEN & CHICKENS in May and touring this autumn. Other co-producing credits include: THE MARVELLOUS ADVENTURES OF MARY SEACOLE at the Edinburgh Fringe in 2016 and DAMAGED GOODS at The King’s Head, as part of PlayMill 2018. She was also associate producer on Pamela Schermann’s OPERA IN THE CITY FESTIVAL 2017, and is the co-creator and sole producer of Rula Lenska’s new one woman show FROM DZIKÓW TO WILLESDEN GREEN. Twitter: @La_Lawrie

Alys is a performance designer based in London. Recently graduated from Central Saint Martins, she is passionate about sustainable design and is exploring how exciting and ambitious theatre design can be made thoughtfully and waste free. Credits include: AN ENEMY OF THE PEOPLE (Playground Theatre), THE CHANGELING and THE TREATMENT (Platform Theatre), AISHA (Old Red Lion and the Tristan Bates Theatre), AN UNNATURAL TRAGEDY and THE SWORD OF ALEX (White Bear Theatre) and TRACING GRACE (Theatre 503). #sustainablescenography

Chuma trained under the Head of Lighting at the Royal Shakespeare Company, where he worked as Lighting Technician on productions including TALES OF OVID directed by Tim Supple and RICHARD II directed by Steven Pimlott. He went on to become Technical Director and Lighting Designer for several theatre companies before moving to London to fully realise a career in lighting design. Since then, his work has been seen at many theatres and festivals across the UK. Recent work includes THE FEAR AND GRAVEL HEART (Bunker Theatre), METAMORPHOSIS (Off the Cliff Theatre) and ROMEO AND JULIET (Controlled Chaos Theatre) both at Waterloo East Theatre, LAST ONE HERE (Tripped Theatre), GIFT OF THE GAB (Shiny Pin Theatre), which he also sound designed, THE PROJECT (White Bear Theatre) and DARE TO DO (Ka Zimba Theatre at The Space). Recently he conceived, produced, directed and co-wrote a very successful run of MACBETH – THE MUSICAL (White Bear Theatre) performed by puppets, for which he also designed the lighting, sound and video. Chuma is also a Sound and Projection designer. Upcoming lighting designs includes TRYING TO BE HER (The Writing Network at The Etcetera Theatre), RICHARD III (Open the Vault productions) and THE SWORD OF ALEX for Beyond the Pale (White Bear Theatre). www.performing-arts.co.uk/chuma-emembolu/

The Press on playwright David Pinner

‘Pinner is a recording angel with a mean pen’

Alan Wright for The Scotsman on FANGHORN

‘Pinner has written an outstanding play on Stalin’

The Press on director Anthony Shrubsall

★★★★ Broadway World on DEATH OF A HUNTER at the Finborough ‘Brilliantly staged, beautifully contrived’

★★★★ Reviews Gate on DEATH OF A HUNTER at the Finborough

★★★★ The Stage on ORBITS at The Drayton Arms

The Press on actor Martin Prest

‘Martin Prest as Malvolio is my number one stand out performance of the year.’

★★★★★ Jessica Gray for The Theatre Tourist on TWELFTH NIGHT

‘Prest [is] a natural storyteller, and has the charisma to make sixty minutes of just him, just compelling.’

★★★★ Views From the Gods on A CHRISTMAS CAROL

‘Prest was excellent… the highlight of the play.’

★★★★ Rob Warren for Everything Theatre on TWELFTH NIGHT

The Demon Appears! New Clip from THE HARROWING 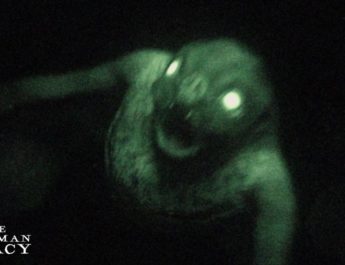 New Trailer and Art Take Flight for “The Mothman Legacy”