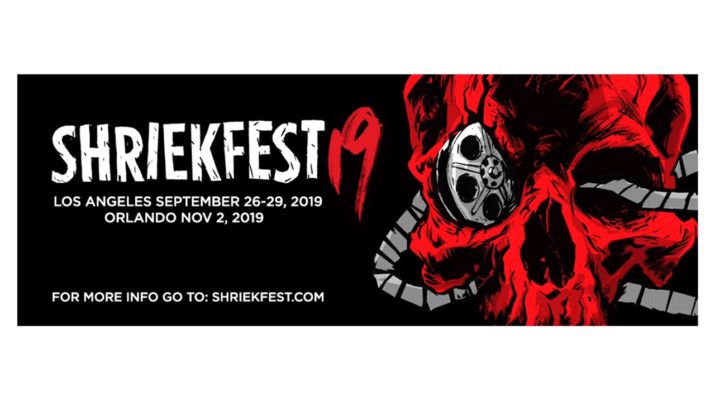 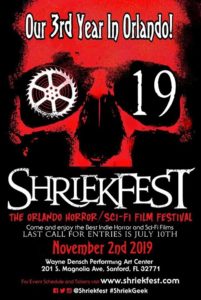 Shriekfest Film Festival has been one of the most successful festivals in LA, as it just celebrated its 19th festival in September. While the west coast has been really good to Shriekfest, it doesn’t get to have all the fun, as Shriekfest has brought their festival to Orlando, Florida. Shriekfest celebrated its 3rd annual festival at the Wayne Densch Performing Arts Center on November 2nd. PromoteHorror.com had the pleasure of attending the event, and got to enjoy 38 short films/music videos.

The first program and film of the festival was “Finley,” and boy did it get things off on the right foot. What starts as the typical puppet like horror film, quickly turns into a funny yet very creepy and creative story. Several films over the course of the day used their platform to make a statement on social issues. “Listen” was one of those films using their horror story to highlight the true horror of domestic violence. And then there was “Most Steps Ever,” which had me thinking ‘what a great idea for a horror movie, why didn’t I think of that!’ Make sure you check it out if you use a smart watch to count your steps.

In the second program, “Overkill” takes the classic horror setup of teens in a cabin, and adds its own hilarious twist as the final girl and killer face-off. To get ready for the holiday season, “Naughty” featured a little girl finding a fake Santa in her house stealing the families’ presents. It doesn’t pay to be on the naughty list. This program ended with one of the funniest films of the day, “We Got A Monkey Paw.” Zack has a house full of evil devices, and all he wants is for Jakki to play one with him. She has no interest in playing anything until he pulls out the monkey paw. It just gets wild and crazy from here, and becomes a great watch!

The third program began at 6:00pm, right when the sun started to set. No coincidence that this block of films was very dark, and creepy overall. “We Die Alone” was all about the search for love, but comes to a very deadly, and depressing ending. “Nocturne” proved that not even the new door bell technology will save you from spirits that want to come inside, while the “Hidebehind” was hiding a freaky monster in the forest. Cyber bullying turned extremely ugly in “Off Fleak,” and finally the audience got a chance to laugh in “Belphegor.” Shot like a reality show or documentary, this short featured the lives of a young couple, Danielle and Brian. Danielle becomes possessed by a demon named Belphegor, but they continued on with life as usual until Belphegor goes too far. This was hilarious from beginning to end! 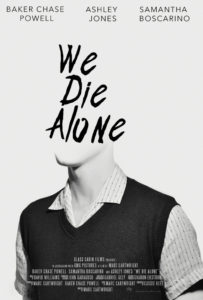 Like the final film of the fest, the fourth program dished out something for everyone. “Chickens” wasn’t afraid to take a look at the recent police violence in the news. Justice was definitely served! Horror icons Freddy, Jason, Michael, and many others made an appearance as puppets in “Trick or Treatment-Healing Old Wounds.” This short poked fun at what it would be like for each of them to be in group therapy together, and they nailed it with the jokes on each character. “The Mime” and “Drip” gave the audience the final scares of the night, and then “Baby Bird” would end the night with a bang. Lets just say it was another version of “The Human Centipede,” and had the audience buzzing as they left the theater.

Overall, we had a blast at Shriekfest, and it seems like everyone who attended did as well. Their mix of short films had a little something for everyone, and were each unique in their own right. The Wayne Densch Performing Arts Center served as a perfect spot to watch some short horror films along with the surrounding area. Denise Gossett, founder and festival director, and her staff has done a fantastic job of bringing horror to Orlando. We hope it returns for a 4th year, and will definitely continue our support of Shriekfest both in LA and Orlando!

Soska Sisters’ WiHMX Massive Blood Drive PSA – Give It Away