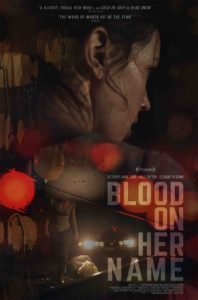 “In a just world Blood On Her Name will be the word of mouth hit of the year”
Rosie Knight, Nerdist

“A tension-filled and devastating look at the inevitability of consequence”
Rob Hunter, Film School Rejects

WATCH THE TEASER HERE
Theatrical trailer to be released

A woman’s panicked decision to cover up an accidental killing spirals out of control when her conscience demands she return the dead man’s body to his family.

BLOOD ON HER NAME is the feature debut from Atlanta-based filmmaker Matthew Pope, who’s previous work has garnered him both national and film festivals accolades. Pope co-wrote the film alongside producer Don Thompson, and the two co-founded Rising Creek together.

SYNOPSIS: The dead body lies at her feet, its blood still draining onto the floor. It was an accident, borne of self-defense, but its discovery could have devastating consequences for local garage owner Leigh Tiller and her son.

In a panic, Leigh decides to conceal the crime, cleaning the bloody scene and scrambling to dispose of the body. But can she actually disappear a man from the earth—from his family—leaving them forever wondering? As Leigh is torn between her primal instincts and tortured conscience she struggles to keep her sins hidden from her estranged father–a cop with a long history of moral compromise –and from the keen-eyed girlfriend of the deceased. Blood On Her Name is a character-driven thriller that explores questions of guilt, moral identity, and the irrevocability of choices in the direst circumstances.

The film World Premiered at the Fantasia International Film Festival and celebrated it’s US Premiere at L.A.’s Beyond Fest.

BLOOD ON HER NAME will open in select cinemas Feb. 28th and on VOD.

About Vertical Entertainment
Vertical Entertainment is a global independent distributor that offers a unique combination of full-service marketing and sales services. Dedicated to providing highly-effective and collaborative solutions, Vertical leverages unparalleled relationships to maximize revenue across all streams. The marketing and sales expertise from Vertical’s seasoned team gives content partners a wealth of experience minus the studio costs.

Vertical won a Film Independent Spirit Award for Best Supporting Actress for Molly Shannon’s role in “Other People” and the film won a GLAAD Award for “Outstanding Film Limited Release” as well. Vertical also had four other Indie Spirit nominations – three more for “Other People” (Best Lead Actor for Jesse Plemons, and Best First Feature and Best First Screenplay for filmmaker Chris Kelly) and one for Best International Film for Babak Anvari’s “Under the Shadow,” which was also the official UK submission for the 2017 Oscars, in addition to winning one BAFTA Award and three British Independent Film Awards as well.

The Strange Case of Dr. Toñito