Saban Films will release the horror/thriller WE SUMMON THE DARKNESS in theaters, on VOD and Digital HD on April 10, 2020.

On the way to a heavy metal concert, Alexis (Alexandra Daddario) and two girlfriends hear a news report of a local murder believed to be tied to a series of satanic killings. After the show, the girls invite three guys to join them at the estate owned by Alexis’s father, a fire-and-brimstone preacher (Johnny Knoxville). What starts as a party suddenly turns dark and deadly in this devilishly entertaining thriller. 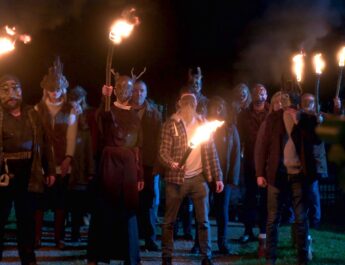 Official Trailer for SACRILEGE – Releasing March 16 in US and Canada