After The End Of The World, What’s Next… 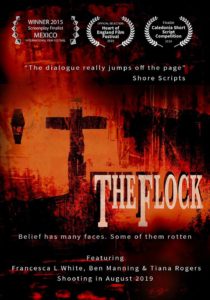 Set in the near future, ‘The Flock’ is a slow-burn, 15 minute horror film that honours the heightened tensions of that genre but with more emphasis on character and theme than blood and gore. The determined Isabel, mayor of a survivors township, takes off with her adoptive daughter, the semi-feral Vera, to search for her missing partner, Abel, who’s been out in the wasteland scavenging. Following his trail, and avoiding the traps he’s set to evade bandits, Isabel and Vera stumble across evidence that makes the apocalypse the least of their worries!

The film opens with Abel, an ex-army medic, crossing paths with Malcolm, a deranged and dangerous survivor, with his own warped vision of a post-apocalyptic world. Tracking Abel’s movements, and facing the numerous threats of the wasteland, Isabel and Vera wind up at the factory where the trail goes cold. In the meantime, Abel’s journey has taken a different route which leaves them all at the gates of an unexpected and deadly future.

Need a little taste of what’s to come???

As an introduction to the world of The Flock, we shot a ‘prequel’, called ‘Leaving Grateful’, in which the inciting incident occurs. Set some 8 years before ‘The Flock’, we’re introduced to some key elements and characters as the ‘apocalypse’ sweeps across the world. Enjoy…

‘The Flock’ is set to star…

The script for ‘The Flock’ has won four awards internationally, the most recent being the 2019 Special Jury Prize at the Barcelona International Film Festival.

Be a part of making this film happen, and support it today at:

-You can appear in the film itself! The ‘Wall of the Dead’ is a photo board that appears in a key scene in the film, and your photo can appear on it

-Prior to shooting ‘The Flock,’ we’ll have a number of production meetings, one of which you’re invited to

-Be in the film, in person! One of the key scenes is a horde of the undead, and you can be one of them.

-Get Executive Producer title in the film’s credits, on IMDB and all associated promotional material.

Visit ‘The Flock’ on Greenlit to…

-Learn more about the story

-Find out more about the cast and crew