TWO-HOUR SEASON PREMIERE: “The Witching Tree” – Premieres Wednesday, April 22 at 8 p.m. ET/PT
Jason Hawes, Steve Gonsalves, Dave Tango and Shari DeBenedetti answer a distressed couple’s call for help in Biglerville, Pennsylvania. The newlyweds have witnessed apparitions and heard unexplained noises in their 18th-century farmhouse, and they believe a cursed “witching tree” in the yard is the root of the haunting.

PARANORMAL 911
A shocking number of 911 emergencies end in paranormal encounters. “Paranormal 911” explores these events through eyewitness accounts of the first responders who lived through them – real-life stories of police, firefighters and paramedics who arrive on scene, only to find themselves in the middle of a paranormal event. As first responders, it’s their job to put themselves in the line of danger – sometimes with terrifying and unexplainable results. [Hour-long episodes]

SEASON PREMIERE: “Uninvited Houseguest, Perimeter Breach and Asylum Attack” – Premieres Saturday, April 18 at 9 p.m. ET/PT
A police office encounters a terrifying entity while investigating a home invasion, a tortured apparition wreaks havoc on a top-secret government site and paramedics are brutally attacked by an unseen force at an asylum.

“Backyard Hanging, Dr. Dead and The Mist” – Premieres Saturday, April 25 at 9 p.m. ET/PT
A firefighter answers a call for help at a house of evil, police chase down the terrifying specter of a dead doctor and an officer is surrounded by a strange fog and shadowy figures while investigating an abandoned car.

SERIES PREMIERE: “Haunted Grounds” – Premieres Saturday, April 25 at 10 p.m. ET/PT
Homes become haunted grounds when poltergeists take up residence. A seance stirs up grim ghosts from the past, a young girl encounters the tortured spirit of a dead bride and a boy discovers that a potential playmate is not human at all.

MAGIC CAUGHT ON CAMERA
Magicians across the United States and around the world take to the streets to perform mind-blowing illusions. From city to city they amaze and bewilder passersby with never-before-seen card tricks, hypnosis, sleight of hand, levitation, vanishing acts and more! [Half-hour episodes]

SERIES PREMIERE: “Magic in the Streets” – Premieres Sunday, April 26 at 10 p.m. ET/PT
Celebrity magician Justin Flom cuts his own baby daughter in half, Andrew Kelly unlocks a stranger’s phone on the streets of New York, an orangutan goes “ape” over a card trick in the UK and much more.

“An Arsonist Ghost and More” – Premieres Sunday, April 19 at 9 p.m. ET/PT
Two brothers tangle with a ghost that likes to set fires, a mother ship unleashes an army of UFOs and a man faces terrifying consequences when he teases an interdimensional being.

TRUE TERROR WITH ROBERT ENGLUND
Hidden away in the dark shadows of our nation’s history are tales so terrifying, they must be true. Veteran actor and legendary horror movie icon Robert Englund (Freddy Krueger of the “A Nightmare on Elm Street” franchise) scours news reports of yesteryear to bring viewers twisted tales ripped straight from the headlines in “True Terror With Robert Englund.” Using his ominous tones and creepy charisma, Englund weaves together a trilogy of spine-tingling tales, guided by newspaper accounts and layered with commentary from historians and experts, that prove that truth is always stranger than fiction. [Hour-long episodes]

“Spirits in the Air” – Premieres Wednesday, April 15 at 10 p.m. ET/PT
The horror escalates as a Massachusetts family hunts for a hidden fortune in a haunted house, a farmer battles a devilish curse in Ohio and a greedy mortician faces the wrath of the dead after he defiles their graves in a corrupt scheme.

SEASON FINALE: “Bad Omens” – Premieres Wednesday, April 22 at 10 p.m. ET/PT
A man uncovers an unholy secret in Kansas, a factory worker confronts the witch he believes cursed him and a Philadelphia secretary is tormented by nightmares foretelling her death.

“Beneath the Bonanza” – Premieres Thursday, April 16 at 9 p.m. ET/PT
Zak Bagans and the crew investigate a saloon in Virginia City, Nevada, where staff are violently attacked by an entity that inhabits the basement. A haunted artifact known as the Suicide Table may be responsible for the aggressive activity.

“Industrial District of the Damned” – Premieres Thursday, April 23 at 9 p.m. ET/PT
Zak Bagans and the crew investigate a 120-year-old building in Salt Lake City’s industrial district. Local business owners claim paranormal activity has recently ramped up after a break-in revealed remnants of a dark ritual in the basement.

THE DEAD FILES
Former NYPD homicide detective Steve DiSchiavi and physical medium Amy Allan are back on the case with a brand-new season of Travel Channel’s hit series, “The Dead Files.” In every episode, DiSchiavi and Allan first investigate each case separately. Utilizing his detective skills, DiSchiavi interviews witnesses and experts and researches the history and facts behind each location. Allan, a physical medium who sees and communicates with the dead, assesses the property to identify what underlying entities reside there. Keeping their findings hidden from each other, the team avoids all contact with one another – coming together only at the very end to reveal their shocking discoveries to the property owners, and each other. [Hour-long episodes]

“The Craving” – Premiers Thursday, April 16 at 10 p.m. ET/PT
Steve DiSchiavi and Amy Allan travel to Tucson, Arizona, where ancient supernatural forces are tormenting a retired cop and his family. Everyone in the home is under attack, and the family fears their 9-year-old may be possessed by something evil.

SEASON FINALE: “Damned in the Desert” – Premieres Thursday, April 23 at 10 p.m. ET/PT
Steve DiSchiavi and Amy Allan travel to Marana, Arizona, where dark supernatural forces threaten to destroy a New Age couple’s sanity and health. They fear if something isn’t done soon their marriage won’t last – and neither will their time on this earth. 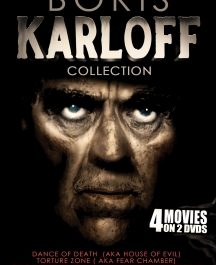