An animated film about the fear of death.

Protagonist of the paradoxical adventure is a famous undertaker who’s been on the streets since death itself was banned in the city and supplanted by a practical method of resurrection, to which no citizen can resist.

The uselessness of the now obsolete coffins drives the funeral director to an economic and existential crisis. Man, now too old, is not able to adapt to the changing times nor is he able to confront a society so distinctly tanatophobic. His own stubbornness will drive the protagonist to expose an irrational system that, in the repudiation of the word ‘end’, reveals all his deception. 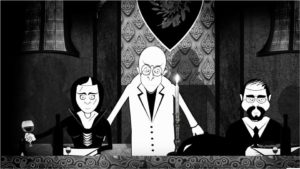 “A work capable of amalgamating with gloomy atmospheres, social criticism and black humor with ease, which shows for the umpteenth time that no budget limitation can prevent a great story from emerging.“
(lostincinema.it).

“Resurrection Corporation is therefore an indictment, at times amusing, in other cruel and splatters of the degrading times we live in which roles and geometries turn upside down and everything appears (indeed is) ethically upside down, distorted, without logic..”
(klub99.it)