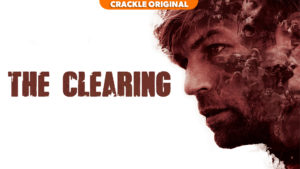 Crackle Plus, a Chicken Soup for the Soul Entertainment (Nasdaq: CSSE) company and one of the largest operators of streaming advertising-supported video-on-demand (AVOD) networks, announced today the premiere of original action horror film The Clearing on June 4th.

As one of the only AVODs continually adding original and exclusive programming that uplifts, entertains, and inspires audiences, Crackle adds The Clearing alongside original and exclusive titles that can only be found only on Crackle, including Crown Vic, On Point, ’85: The Greatest Team in Football History, Wonders of the Sea, Yelawolf: A Slumerican Life, and Going From Broke.

The movie, only available on Crackle beginning June 4th, stars Liam McIntyre (“Spartacus”) as a father who takes his daughter, played by Aundrea Smith (“Diary of a Future President”), on a weekend camping trip during a mysterious disease outbreak. The film also stars Sydelle Noel (“G.L.O.W.”) and Steven Swadling (“Kickboxer”).

Set at the dawn of a zombie apocalypse, The Clearing unfolds amid tensions between Tom (McIntyre) and his wife (Sydelle Noel) over his parental responsibilities and the time he spends with his young daughter Mira (Smith). Tom takes Mira on a camping trip, only to discover the impending disaster that leaves the pair trapped in a clearing in the woods, fighting to make it out alive.

Making his feature directorial debut with The Clearing, writer-director David Matalon’s goal was to pay homage to beloved zombie tropes while blazing his own way with imaginative screenwriting and innovative filmmaking techniques. “I couldn’t be more excited for The Clearing to have its premiere on Crackle and I’m grateful for their passion and enthusiasm for our movie,” said Matalon. “I’m thrilled to take viewers on this action-packed ride.”

“For the segment of our audience that loves zombie movies, The Clearing follows in the footsteps of our other horror offerings, such as Office Uprising and the Dead Rising film series,” said Philippe Guelton, President of Crackle Plus. “This film will deliver an action-packed distraction that our fans are craving right now.”

As a partner exclusive, the film will debut on May 25 on the Crackle Channel on Amazon Fire TV devices, available for early access in 34 million U.S. homes.

Crackle is available on Amazon FireTV, RokuTV and devices, Apple TV, most Smart TVs (Samsung, LG, Vizio), Gaming Consoles (PS4 and XBoxOne), on iOS and Android mobile devices and on desktop at Crackle.com.

ABOUT CHICKEN SOUP FOR THE SOUL ENTERTAINMENT

Crackle Plus is a video-on-demand (VOD) joint venture formed by Sony Pictures Television and Chicken Soup for the Soul Entertainment, Inc. (Nasdaq: CSSE). The company’s consumer facing ad-supported VOD (AVOD) channels include Crackle (US and Canada), Popcornflix, Popcornflix Kids, Truli, Popcornflix Comedy, Frightpix, and Espanolflix. It also owns subscription video-on-demand (SVOD) platform Pivotshare. Crackle Plus reaches over 430 million monthly visitors making it one of the largest AVOD streaming platforms in the U.S. Its content library includes over 780,000 hours of programming.

Screen Media Ventures, LLC, a Chicken Soup for the Soul Entertainment, Inc. (Nasdaq: CSSE) company, acquires the rights to high quality, independent television series and feature films for the US and Canada. Screen Media Ventures acquires worldwide rights for distribution through theatrical, home video, pay-per-view, free, cable and pay television, video-on-demand, and new digital media platforms. The company acquires AVOD rights for third party networks and is the main supplier of content for Crackle Plus and other Chicken Soup for the Soul Entertainment properties. With a library of over 1,500 television series and motion pictures, Screen Media Ventures is one of the largest independent suppliers of high-quality tv series and motion pictures to U.S. and international broadcast markets, cable networks, home video outlets and new media venues. For more information, visit www.screenmedia.net.

Rise of APEX: Black Market Escape Rooms Delivers a Stunning Sequel to their Popular Immersive and Interactive Experience, MurderCo: The Harvest, for the 2022 Halloween Season