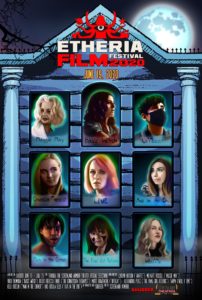 The 7th edition of the Etheria Film Festival brings you the nine best new short horror, science fiction, thriller, action and fantasy films directed by women from around the world. Etheria 2020 is simultaneously hilarious, terrifying, and sometimes heartbreaking; our films are about the loneliness and absurdity of digital interactions, the terror of complete helplessness, uncomfortable magical sexual enlightenment, the horror of conversion therapy, musical expression in the furture dystopia, the surreal cycle of the final girl trope in horror films, livestreaming your *entire life*, sex with strangers gone completely horrifying, and the existential contemplation of death, life, and existence with an dying AI. Get ready to be blown away by these nine directors and their take on our favorite genres.

The films will be presented as one approximately 2-hour compilation and not as individual videos.

Kerry is at a sleepover with the socially awkward, mysteriously orphaned heiress Katie. Friendship–in a society that grows ever isolating–is explored as Kerry learns the hard way that Katie always gets what she wants.

Sometimes doing nothing can be the worst move of all. 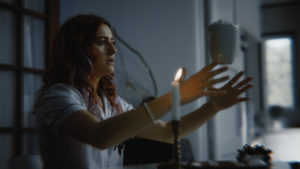 Young witch Lily prepares a magic pumpkin spice latte that forces Brian to relive the physical experience of their terrible sex from the previous night–but from Lily’s perspective.

A pansexual, polyamorous trio kidnap a ‘pray-the-gay-away’ evangelical conversion therapist and torture him until he sees the light. 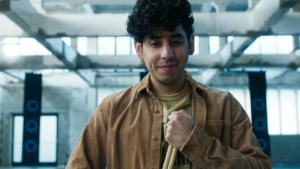 In a polluted future 20-year-old drummer Olly wants only one thing: to get inside the dome, where the air is clean and the best musicians live. In order to get in, he must pass a series of absurd tests.

A driver emerges from a massacre unscathed and finds himself trapped in an endless cycle of saving the final girls. The Driver soon learns that one mustn’t fight the rules of horror, and the past he’s been driving from catches up to him.

An online ‘livecaster’ with a dangerous brand has a crisis of conscience over her volatile career choice in a future world where jobs are limited, and conflict is currency.

Man in the Corner

What starts out as a hot hookup with his dream guy turns into a nightmare when Daniel realizes they aren’t alone in the house.

Ava in the End

After tripping over her dog and dying, a struggling actress wakes up in a virtual purgatory and waits for her mind to be downloaded into a new body. 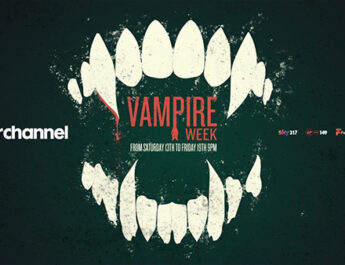