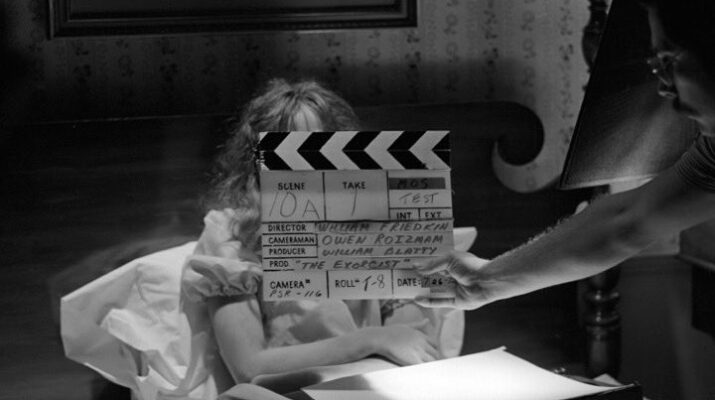 Here are some of the horror DVD/Blu-Ray releases for April 13th!

A quiet loner, Nic Cage finds himself stranded in a remote town when his car breaks down. Unable to pay for the repairs he needs, he agrees to spend the night cleaning Willy s Wonderland, an abandoned family fun center. But this wonderland has a dark secret that the The Janitor is about to discover. He soon finds himself trapped inside Willy’s and locked in an epic battle with the possessed animatronic mascots that roam the halls. To survive, he must fight his way through each of them.

Is there a (mad) doctor in the house? Yes! shrieks Doctor X, filmed in rare two strip Technicolor®. An eminent scientist aims to solve a murder spree by recreating the crimes in a lab filled with all the dials, gizmos, bubbling beakers and crackling electrostatic charges essential to the genre. Lionel Atwill is Doctor Xavier, pre King Kong scream queen Fay Wray is a distressed damsel and Lee Tracy snaps newshound patter, all under the direction of renowned Michael Curtiz. Also includes the separately filmed B&W version, originally intended for small U.S. markets and International distribution, which has been unavailable for over 30 years.

LEAP OF FAITH is a complete dissection and sweeping examination of the award-winning genre classic The Exorcist. Explore the uncharted depths of William Friedkin’s mind’s eye, the nuances of his filmmaking process, and the mysteries of faith and fate that helped shape his life and filmography, as told by the man himself.

A nuclear-plant leak turns a bus-load of children into murderous atomic zombies with black fingernails.

These three superheroes are HEADS above the rest! From cult director Richard Elfman (THE FORBIDDEN ZONE) and producer Charles Band comes SHRUNKEN HEADS, a legendary comedy horror head-trip available now on Blu-ray for the first time, remastered from the original 35mm camera negative! When three inner city kids are murdered in a gangland showdown gone wrong, a mysterious witch doctor opts to drag them back from the grave. Well, most of them anyway! The voodoo priest leaves the boys’ bodies and only reanimates their heads. Now, this trio of floating craniums are left to fly around New York with only one thing on their minds: revenge! Elfman fills the screen with his patented blend of absurdity, grand guignol effects, dark humor and surreal insanity and gives the beautiful Meg Foster (THEY LIVE, LORDS OF SALEM) one of her wildest roles, that of lesbian crime kingpin Big Moe. Powered by original music from Elfman’s brother, the award winning composer Danny Elfman (BATMAN, THE NIGHTMARE BEFORE CHRISTMAS, BEETLEJUICE), a delirious score by the great Richard Band (RE-ANIMATOR, PUPPET MASTER) and slick cinematography by Stephen McNutt (BATTLESTAR GALACTICA, THE DEAD ZONE), SHRUNKEN HEADS is one the weirdest and coolest Full Moon classics ever! Get ready to flip your lid and lose your mind! Bonus features include: Main title music by Danny Elfman., Behind the scenes featurette.

Forbidden Science is a unique blend of noir science fiction and erotic programming. Set in the near future, the stories revolve around the evil corporation, 4Ever Innovations, whose young and brilliant scientists download and sell memories. They replace those we’ve lost with clones and devise technology that helps us live out our greatest fantasies; from saving a failed relationship, to creating the perfect lover, to being irresistible to the opposite sex – but sometimes our deepest desires come at a terrible price. 4Ever offers customers the opportunity to live out their fantasies in a virtual world but there are secrets within 4Ever Innovations that may cost you your life. WARNING: Mature Audiences – Contains Nudity and Adult Themed Sexual Situations

A shark bite spreads a virus across the globe, turning the world upside down. Deep below the ocean, a group of researchers race against time to find a cure. Something has infected the lab technicians and it’s a race against time to reach the surface with an antidote before they are all killed by themselves and the sharks lurking inside the test pool and outside in the ocean. An action packed fear fest from Mark Polonia! Bonus features include: Shark Movie Trailers, Trailer, Director’s Commentary, SRS Trailers

The Lost Eurocine Sexploitation Classic! Uncut and Remastered! From the studio that brought you OASIS OF THE LOST GIRLS and ZOMBIE LAKE and the director of THE INVISIBLE DEAD and PANTHER SQUAD comes the ultra-obscure, wildly sleazy shocker HOUSE OF CRUEL DOLLS, perhaps the most messed up movie in the vast Eurocine library! Also released as THE HOUSE OF LOST DOLLS (among many other international titles), Pierre Chevalier’s outrageously vulgar melodrama is a horny hybrid of existing European exploitation films spliced together with new footage to tell the tell tale of Yvette (Magda Mundari) who, after being liberated from a life of sex slavery in the titular barbaric bordello, tells her sordid story in flashback. Jack Taylor (Jess Franco’s FEMALE VAMPIRE and SUCCUBUS) also stars as an intrepid secret agent (in footage shoehorned in from the ’60s spy thriller AGENTE SIGMA 3: MISSION GOLDWATHER) while sexploitation starlets Silvia Solar (CANNIBAL TERROR) and Sandra Jullien (Jean Rollin’s SHIVER OF THE VAMPIRES) also show up to the patchwork party. Filled to the freak-out point with nudity, violence and all-around bad behavior, HOUSE OF CRUEL DOLLS is one of the most shameless, mind-melting films ever assembled, available now from Full Moon for the first time in North America, fully uncut and remastered from the original negative. Come and hang out with the cruel dolls…you’ll never be the same again!

Five dangerous patients, suffering from extreme phobias at a government testing facility, are put to the ultimate test under the supervision of a crazed doctor and his quest to weaponize fear.

VHSV 1 A young woman (Valerie Mulligan) returns home to discover a strange VHS tape marked Watch Me on her doorstep. However, she is unaware that someone is actually watching and recording her, as she is subjected to the contents of the cursed cassette. The grisly footage contains kill after kill and the video soon proves to be too much for her to handle. But it’s too late, she’s already become the first victim for the shocking sequel. From the creators of Troma’s Grindsploitation series! VHSV 2 A Horror film fanatic (Ronnie Angel) returns home from the video rental store with a VHS copy of VHS Violence II. He enthusiastically inserts the tape into his VCR for a night of gory fun. However, with each scene looking increasingly more realistic and brutal, be begins to suspect this movie is not really a movie at all. Before he can eject the tape, the Snuff Killer responsible for the carnage arrives to collect his next VHS victim! Twice as extreme as the original film! Not for the faint of heart! WARNING: Mature Audiences Only – Graphic Material, Viewer Discretion is Advised

A possessed piñata, seeking to avenge the savagery that humanity has inflicted on his kind, picks off a group of friends, one by one, in an unending night of terror! To celebrate the fifth anniversary of this cult horror-comedy smash hit KILLER PIÑATA is giving fans what they want by returning to stores with the first Blu-ray release in years. This special edition set includes an updated cut of the movie with a shorter running time and more action-packed pace, revised color grade, and brand new sound mix from the original elements. Loaded with bonus materials, this disc is a must for fans of the film! Bonus features include: Director’s Interviews, Bloopers & Deleted Scenes, Special directors cut, with revised sound mix and color grading, Making-Of Documentary, Audio Commentary

Two cult members take a road trip in a motorhome before thier predicted end of the world, but soon run into a team of vampire hunters and are recruited to help defeat an army of monsters.

A beautiful young woman is subjected to a grueling night of terror – all accomplished in one take on one night, as she investigates paranormal reports at an abandoned facility.

High in the rugged mountains, a disparate crew of builders begin renovating an opulent mansion belonging to Simon, the heir of an illustrious military family. ​As Simon forces the workers to live in squalor and refuses to pay them, tensions begin to simmer. One by one the men snap, turning first on their boss and then on each other, building to a visceral crescendo of violence that ensures none of them will return home the same. ​

After he thinks his straight edge friends have gone too far, young punk Brad (Cory Kays) decides to leave them behind when he meets happy-go-lucky partier Sean (Sean Jones). He attends his first house party where he meets beautiful Maybe (Evelyn Reidy) then all hell breaks loose. A group of masked intruders attacks the houseful of drunks and stoners making sure no one gets out alive. It’s up to Brad, Sean and Maybe to save the party in this blood-soaked thrill ride from writer and director Jason Zink.

Two Versions of Arthur Machen’s Cosmic Horror Classic Together for the First Time!