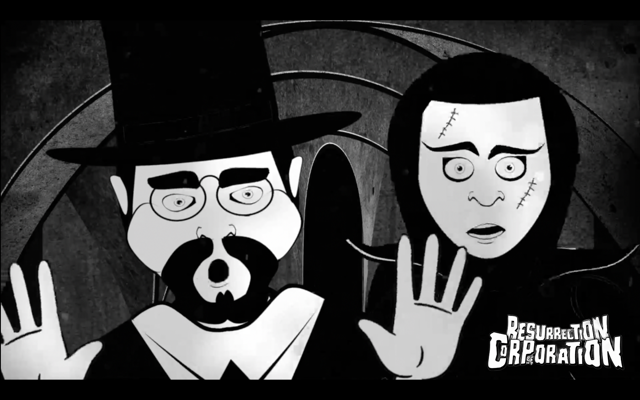 An animated film about the fear of death

Protagonist of the paradoxical adventure is a famous undertaker who’s been on the streets since death itself was banned in the city and supplanted by a practical method of resurrection, to which no citizen can resist.

The uselessness of the now obsolete coffins drives the funeral director to an economic and existential crisis. Man, now too old, is not able to adapt to the changing times nor is he able to confront a society so distinctly tanatophobic. His own stubbornness will drive the protagonist to expose an irrational system that, in the repudiation of the word ‘end’, reveals all his deception.

An eternal project but well orchestrated!

“The processing of Resurrection Corporation, has taken over four years of hard work, starting from the long management of the subject and the screenplay up to the complex work of character design and animation, made with three different software (graphics, lip sinc and body animation). The first step of processing followed a second one aimed at refining the movements and lights up to the post-production phase in which are followed dubbing, sound, soundtrack and assembly.“

“We’re not PIXAR but we love doing things right.“

Noble references are in order!

A few Resurrection Corporation frames are all it takes to figure out which film period it’s inspired by.

Scenographic backdrops deformed to the extreme, the use of black and white, sharp animation and static framing are all elements derived from German expressionism and in particular from three films: The Cabinet of Doctor Caligari (Das Cabinet des Dr. Caligari, 1920) by Robert Wiene, to which the eponymous character of the film is inspired too, The Golem – How came to the world (Der Golem: wie er in die Welt kam, 1921) by Paul Wegener and Nosferatu the vampire (Nosferatu, eine symphonie des Grauens, 1922) by Friedrich Wilhelm Murnau.

There are obviously homages to “Vampyr – The vampire” (Vampyr – Der traum des Allan Grey) (1932) by Carl Theodore Dreyer or to the gothic period of Roger Corman (especially to “The Raven”, 1963) and obviously to the masters of the local gothic (Mario Bava, and Antonio Margheriti). 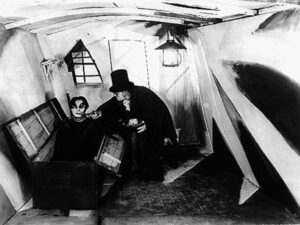 “A work capable of amalgamating with gloomy atmospheres, social criticism and black humor with ease, which shows for the umpteenth time that no budget limitation can prevent a great story from emerging.“
(lostincinema.it)

“Resurrection Corporation is therefore an indictment, at times amusing, in other cruel and splatters of the degrading times we live in which roles and geometries turn upside down and everything appears (indeed is) ethically upside down, distorted, without logic.”
(klub99.it)

Born in 1970 in Milan, in 2009, he made L’INVASIONE DEGLI ASTRONAZI and in 2015 SICK SOCK MONSTERS FROM OUTER SPACE distributed in the States by TROMA and in Italy by Home Movies.

Born in Gallipoli in 1986, graduated in Cinema, Television and Multimedia Production, debuted in 2018 with MCBETTER, distributed in North America by BAYVIEW ENTERTAINMENT and in Italy by Home movies.

1844 Entertainment is an independent distribution and production company specializing in film and television. Our team of experts in project development, production, structured finance, distribution, sales and marketing has the ability to create and add value to the content it produces and distributes. www.1844entertainment.com