Irish gothic rock act, pMAD has just unveiled their debut single and video, “Who Am I”.

Taking the free time granted by the pandemic and a new approach to life, Paul Dillon aka pMad got his act together and finally made a full album.  These tracks, with help from friends in Latvia, Germany, Ireland and Brazil are now fully mixed, mastered and ready for release on Zedakube Records.

The debut single ‘Who Am I’ is an emotional mix of pMad’s haunted, gloomy voice, choir and guest voices in addition to dramatic keys, neat bass lines, guitars all tied together with a pulsating drum groove.

‘Who Am I’ is an audio and visual emotional rollercoaster. Firstly, seeing the coroner examining a body, we are to decide if it is the perpetrator or the    victim. The song is asking, “Am I the perpetrator? Am I the victim? Am I the survivor? Am I good or evil? Which one are you? Who Am I?”

pMad is a survivor using hope as the medicine while being amazed by the horror we can perpetrate on each other and our environment.

“Who Am I” appears on the forthcoming pMAD album due out in 2022.  The single is available now via Bandcamp.

Buy/Stream “Who AM I” Now 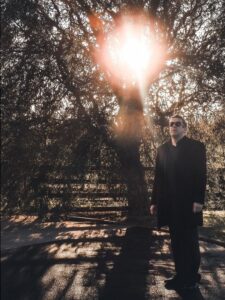 BIOGRAPHY:
Paul Dillon’s musical career started out when The Suicidal Dufflecoats came to into being. Many songs were created, many fights occurred but nothing got released

The Return of the Suicidal Dufflecoats were formed with no change but with one battle of the bands competition resulting in a win. However, the band broke up before the next round.

Paul Dillon aka pMad continued writing lyrics and piecing sounds together. The multi instrumentalist put together possibly over 100 tunes but the dream of releasing any never came to fruition.

The pandemic gave Paul the time to really put the head down and concentrate on actually getting music released. The 100 or more tunes have been whittled down to 20 or so, some of which will still not make the cut.

Eight tunes and one extended mix have been finalized, mixed and mastered and ready for release in 2022;  ‘Who Am I’, “Medicine”, “Broke”, “Horror” and more.