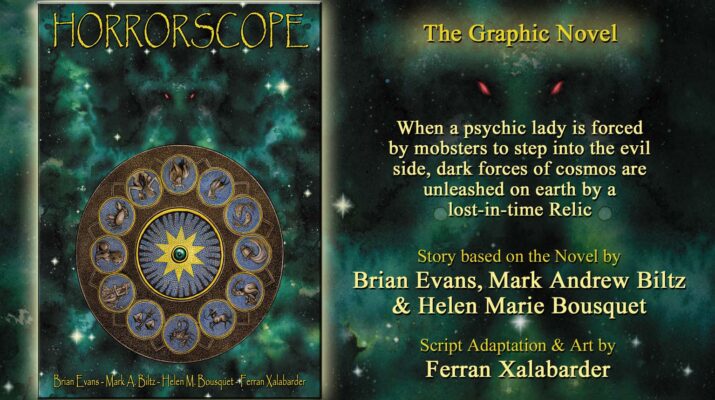 A dark mystery written in the stars. 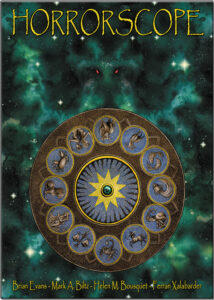 When a psychic lady is forced by mobsters to step into the evil side, dark forces of cosmos are unleashed on earth by a lost-in-time Relic.

West Wind is proud to announce the publication of an absorbing story!

“Horrorscope” is the Graphic Novel adaptation by Ferran Xalabarder of the first book of the trilogy “Horrorscope”, by Brian Evans, Mark Andrew Biltz and Helen Marie Bousquet.

This story is about Helen Wilson, a psychic who makes a living doing Tarot readings for twenty-five bucks at her Naugatuck home. She is the heart of this choral story, full of great characters interlinked over time and space. A good person, living a humble life, Helen helps her neighbors and friends whenever she can. But when a case of wrong serendipity brings her in the radar of the most powerful family of mobsters in New York City, terrible and strange things will start to happen. Dark and powerful forces have been dwelling for eons in the starry skies above us, and an unaware and fragile humanity is at their mercy…

Discover the mystery hidden beyond the stars. 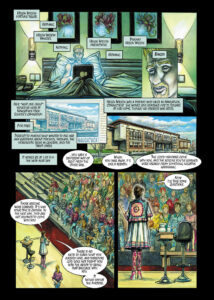 Available on internet stores. You can find the different editions following the links below: 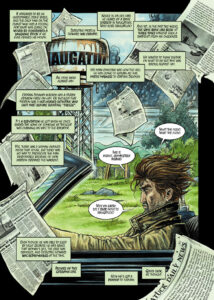 Brian Evans is an American actor, writer, political candidate, and big band singer known mostly as a crooner. Evans’ singing career began in the late 1980s and later included extended performances in Vancouver, Las Vegas, and Hawaii. After a role in a television commercial, he was hired in other acting roles in the 1990s. He was later cast in the 1990 pilot of “Beverly Hills, 90210” as a “Track Kid”, and a 1994 episode of “Full House” as Kimmy’s boyfriend. He also appeared in New Line Cinema’s “Book of Love”(1990) and the 1995 remake of the 1971 film ”The Barefoot Executive”. In 1996, Evans moved to Vancouver where he performed at the Babalu Lounge and released his first album, “Quite Frankly”. It became the #1 bestselling independently released CD in Canadian history. For the next two years he performed throughout Canada. His second Canadian release, Maybe This Time, outsold the first, and Evans was booked for a 377-show run at the “Desert Inn” in Las Vegas. He is the only artist ever to record a live CD at the “Desert Inn”. After the hotel was demolished, Evans opened for Jay Leno at “The Mirage” and then returned to Los Angeles where he made music for television and film. His autobiography, “Dreamer”, was published in 1994. Evans, Helen Bousquet (his mother), and Mark Andrew Biltz are the creators of the novel “Horrorscope”.

Mark Andrew Biltz: is an American Christian pastor and author. His theories correlate solar and lunar eclipses with biblical prophecy, and he has published several books on the topic. He is the Washington State director of Christians United for Israel. He began writing about the “blood moon” tetrad phenomenon in 2008, and has come to be known as “the blood moons pastor” or “Blood Moon Biltz”. His writings correlate lunar and solar eclipses with the modern State of Israel. “Blood Moons: Decoding the Imminent Heavenly Signs” (2014), “The Three Messiahs: The Startling Connection between the Jewish Messiah, the Antichrist, and the Twelfth Imam” (2017) and “Decoding the Antichrist and the End Times: What the Bible Says and What the Future Holds” (2019) are some of his books. He also appeared in several TV shows and documentaries from 2009 to 2015; like “Four Blood Moons” (2015) and “Let the Lion Roar” (2014).

Ferran Xalabarder is a European comics author and illustrator from Barcelona, Spain, probably best known for his mind-blowing fantasy and Sci-Fi comic short stories published in the Heavy Metal Magazine between 2002 and 2015: “The Key to Valhalla”, “Game Over”, “A space Trifle”, between others and the many chapters of “The Oniria saga” (Saga which is currently being published in (France). During his career, he’s been working on almost every field of the visual storytelling realm. He published short comic-stories and illustrations in the Spanish versions of “Creepy” and “The Savage Sword of Conan” magazines, and posters, pin-ups and covers for the Spanish publisher of Marvel comics at the time. He also worked at Fox Animation Studios in Phoenix, Arizona, doing Story-boards and production designs for the animated feature films “Anastasia” (1997) & “Titan A.E.” (2000). 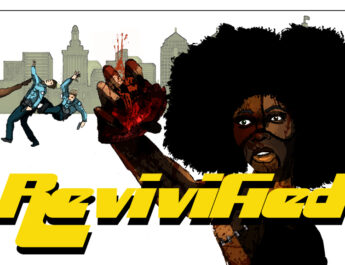