HAUNTED is a serialised audio drama that tells eight stories split across 32 episodes. A horror-adventure series, creator Jamie Evans describes the show as “Doctor Who with the horror dialled up.” The show tells the story of Abigail Corbin, an enthusiastic paranormal podcaster who finds her town beset by a mysterious radio signal which seems to constantly change the frequency on which it is broadcast. Those who hear this mysterious signal, begin to lose touch with reality and embark on a spiral of depression, uncontrollable rage and inexplicable delusion. In a desperate attempt to find answers, she seeks out retired paranormal investigator James Hunter, now a drunken and reclusive oddball. Together, the duo embark on a series of investigations that will take them to the very edge of our known reality and into confrontation with dark secrets and supernatural forces. The X-Files meets Doctor Who in this world-bending, adventurous, occasionally comedic series that is sure to grip listeners from its very first episode. HAUNTED begins airing on 20th March on Spotify, iTunes and Audible.

Jamie Evans, creator of the show, originally began working on the concept over a decade ago during his time at university. Originally penned as a TV series, it soon became clear that the show was simply too expensive to be produced on an independent budget. “The idea never left me” Jamie explains, “I kept toying with it over the intervening years, altering it, trying to play with the formats and see what we could do. Impala Films had just come off of producing our first feature film, Candy Hart and the Fire of Catalan, when the UK government announced the first lockdown. We were only allowed to go out for exercise once a day back then so to make it last, I loaded up a whole bunch of audio dramas on my phone and would go for 2-3 hour long walks. One day it suddenly hit me; audio drama was the perfect viable medium for HAUNTED. The budgets needed are much lower with audio drama as you aren’t building sets or costumes or anything like that. It was also COVID-friendly as we could potentially bring actors in one at a time and record them separately.”

Who Are The Characters? 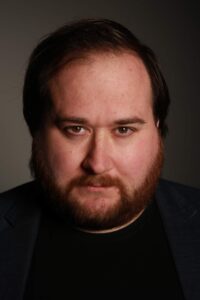 James Hunter is a former paranormal researcher who spent his 20s writing books that debunked famous hauntings around the world. Despite being keen to find evidence of the supernatural, James was always able to adequately explain the mysterious events he investigated and as such, eventually lost faith in his crusade. Falling into a deep depression at the thought of having wasted his life, he became a reclusive drunk until one day Abigail Corbin turns up at his doorstep and draws him back into the strange world of paranormal investigation. Sarcastic, acerbic and eccentric, James isn’t the sort of person who makes friends easily, but he and Abigail are quick to form an unshakeable bond as they embark on a journey to save those affected by the unexplained. As darkness closes in, however, even their bond may not be enough to protect them.

A bright and intelligent young woman with a morbid fascination with the supernatural. Abigail is the host of a semi-popular podcast that deals with all things spooky and kooky. As people in town begin to show the effects of exposure to The Signal, however, she finds herself drawn into the very world that has long fascinated her. Though she is initially disappointed to discover that James Hunter is not the way she thought he would be, she takes this in her stride and is able to pull the grumpy former author out of his self-imposed exile. Brave, inquisitive and somewhat of an adrenaline junkie, Abigail Corbin forms the centrepiece of this extended tale of adventure, mystery and terror.

Luke Hunter joins the season 1 cast as recurring character Dan Cowell. Having worked with Impala Films on Candy Hart and The Fire of Catalan, the team were eager to work with Luke again and wrote the role of Dan Cowell with the actor in mind. Dan is a young police officer in town who also happens to be Abigail’s ex-boyfriend. Sceptical of the supernatural, he is not impressed when Abigail brings James Hunter to town and is even less impressed at the prospect of having to work with him. Dan is a firm believer in the rule of law and the processes of law enforcement, but a dark anger simmers beneath the surface that can cause him to act rashly and will bring him into direct conflict with James Hunter.

Invisible Man Thriller The Unseen to Debut on DVD and Digital this February 26th!