Nucleus Films have two exciting releases coming to you in Spring 2022 and if you are a fan of Italian film these are going to be films you will want to add to your collection. 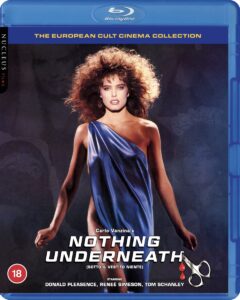 From high fashion… to high terror!

Newly restored in 4K from the original negatives, Nothing Underneath is one of the great unsung films of the late giallo era, and comes fully loaded with extras.

Nothing Underneath is scheduled to be released by Nucleus Films on 30th May 2022 and is up for pre-order now:

TOO BEAUTIFUL TO DIE 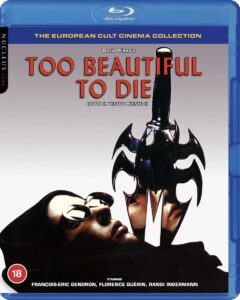 Modelling can be murder!

After one of their number is raped at a party and then mysteriously murdered some time later, a group of supermodels who moonlight as high-class hookers find that a brutal killer is taking revenge on everyone involved in the original assault, just as a mysterious new arrival joins their group for an extravagant music video-style fashion shoot. Who is she and what is her connection to the series of violent deaths taking place around her?

This Nucleus Films presentation of Too Beautiful To Die – aka Nothing Underneath II – is newly restored in 4K from the original 35mm negatives, looking more stunning than ever before and is complete with extensive special features.

Too Beautiful To Die is scheduled to be released by Nucleus Films on 16th May 2022 and is up for pre-order now:

For more information on Nucleus Films and their releases head to their website: