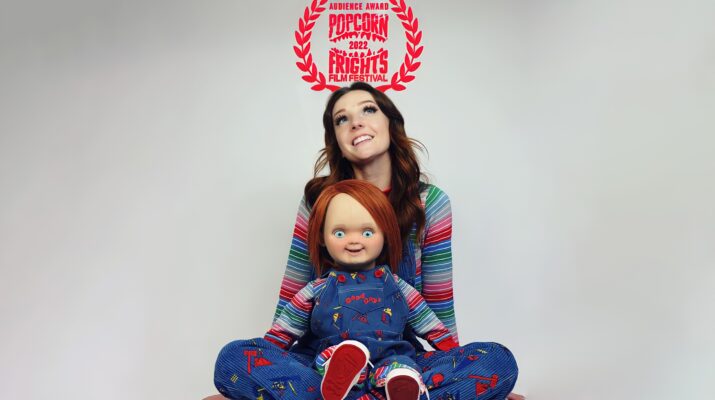 The Eighth Annual Popcorn Frights Film Festival was a hybrid experience that pulled in a record-setting 10,000 attendees and viewers across all 50 U.S. states 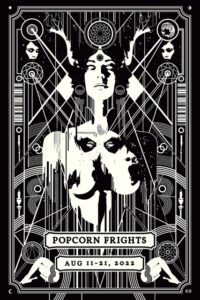 As its eighth edition comes to a close after eleven nights of in-person and virtual programming, Popcorn Frights Film Festival is proud to announce its juried and audience awards that were selected from its lineup of 113 films (36 features and 77 shorts films from 20 countries) in 10 categories. This year’s jury consisted of members of national media and local filmmakers, who chose to honor Florida filmmaker Sylvia Caminer’s FOLLOW HER with the Jury Prize for Best Feature Film. In announcing the Feature Film Prize for the film, the jury said the following: “A socially relevant horror movie for modern times, Sylvia Caminer’s Follow Her features a completely unpredictable screenplay by star Dani Barker with a twist at the end that rivals The Sixth Sense. Caminer’s directing style is near perfection, and we can’t wait to ‘follow her’ into her next film.” 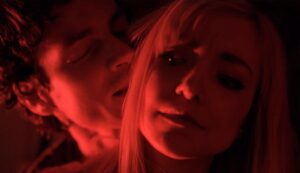 Accepting her award, Sylvia Caminer said, “Winning the Jury Prize for Best Film is such an incredible honor as the level of programming at Popcorn Frights is top notch — we saw such fabulous films at the festival. It is truly my new favorite American film festival! The directors Marc and Igor take such incredible care of the filmmakers, the audiences are tremendous and such great networking! It’s everything you hope for in a festival. I can’t wait to make another film so that I can hopefully get back there soon.”

This year’s Scariest Feature Film Prize was given to The Ruins director Carter Smith’s latest horror SWALLOWED. In its effort to shine a brighter spotlight on first-time filmmakers, Popcorn Frights created its New Nightmare Prize celebrating filmmakers making their feature film debuts. This year’s recipient is Shane Brady’s poignant fever dream BREATHING HAPPY, which received its theatrical world premiere at the Festival to great acclaim. Shane said the following in accepting the award:

“Making my first feature, and self-funding it, is one of the scariest things I’ve ever done in my life — if not THE scariest. So it is only fitting that Popcorn Frights, A HORROR MOVIE FILM FESTIVAL, GAVE US AN AWARD!!! To be not only recognized to be accepted into film festivals as a first-time filmmaker, but to be celebrated for it??? That’s more than I could have ever hoped for. On behalf of our entire cast and crew, with our whole hearts, we thank the city of Miami, FL and the wonderful people at Popcorn Frights for making our time there so memorable.”

Winning the Jury Prize for Best Short Film was KICKSTART MY HEART by Kelsey Bollig, one of 77 films competing for the prize in five shorts blocks. Receiving the Scariest Short Film Prize was Ryan Valdez’s WE GOT A DOG, a sinister tale that takes an incredibly simple story and delivers something truly special.

In total, Popcorn Frights saw more than 10,000 films and events attended in-person and uniquely viewed in all fifty U.S. states. Every audience member in every one of those hybrid screenings was able to vote online during the Festival, and for as many films as they wanted — but only once per film. Crowned as Popcorn Frights’ Audience Award for Best Feature Film was Kyra Gardner’s LIVING WITH CHUCKY and winning the award for Best Short Film was Will Lee’s body horror RINGWORMS. It is the second time in Popcorn Frights’ history that a feature film directed by a woman has won the Audience Award, following Kier-La Janisse’s win last year for her documentary Woodlands Dark and Days Bewitched.

In receiving the prize, Kyra Gardner shared the following statement: “I am so humbled and honored to see such a dedication to our friend til the end, Chucky. Thank you so much to all the people who attended, and to Popcorn Frights for such a wonderful festival. It means a lot to receive love and appreciation from the very people I made this movie for — the audience. Thank you so much for selecting me for the Audience Award, it is something I don’t take lightly.”

The Festival, which proudly celebrated 28 World Premieres, 6 North American Premieres, 5 US Premieres, 19 East Coast Premieres, and 45 Florida Premieres, featured 55 scheduled in-theater and virtual screenings and events, in addition to its virtual reality world experience. More than 50 filmmakers flew down to attend all the festivities in downtown Fort Lauderdale and Miami Beach at this year’s Popcorn Frights.

Popcorn Frights began with the world premiere of the dark comedy TINY CINEMA directed by Tyler Cornack on opening night on August 11, and continued until August 21 with a mix of live events, parties, premieres, industry sessions, and more. Festival highlights included a live score performance by Miami artist Richard Vergez for NOSFERATU’s centennial anniversary, an under-the-stars 25th Anniversary presentation of THE FIFTH ELEMENT on Ocean Drive in partnership with the City of Miami Beach, the presence of Chucky “The Good Guy” doll at the world premiere of LIVING WITH CHUCKY, a mind-melting magic show by Shane Brady before the theatrical world premiere of his film BREATHING HAPPY, a rooftop party overlooking Miami Beach hosted by The Betsy Hotel, jam-packed industry sessions with panelists including Florida filmmakers Jonathan & Michael Cuartas (My Heart Can’t Beat Unless You Tell It To) & Jessica Henric (Don’t Let It In) as well as Kelsey Bollig (Kickstart My Heart) that was moderated by ALTER, two beach parties, spotlight on homegrown talent in Popcorn Frights’ 100% Pure Fresh Squeezed Florida Horror program, the surprise appearance of Mohammed Ali’s wife generously signing autographs for all guests attending the world premiere of THE BARN: PART II, Horror Movie Trivia presented by Fangoria & ALTER, and a closing night that featured live ripping commentary by three Miami comics for the 35th anniversary of the sensational cult classic MIAMI CONNECTION, and so much more!

The full list of the festival’s award winners can be found below:

The eighth edition of the Popcorn Frights Film Festival was made possible with the support of its generous sponsors, including ALTER, The Betsy, Fangoria, Giggster, O Cinema, Savor Cinema, Screambox, Slasher Energy, Tubi, and its loyal fans. Submissions for the 2023 Popcorn Frights Film Festival are now open via FilmFreeway: http://filmfreeway.com/popcornfrightsfilmfestival 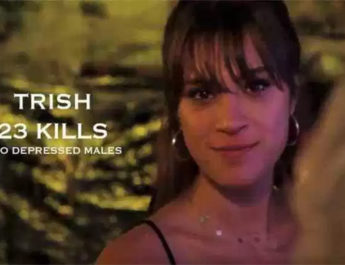