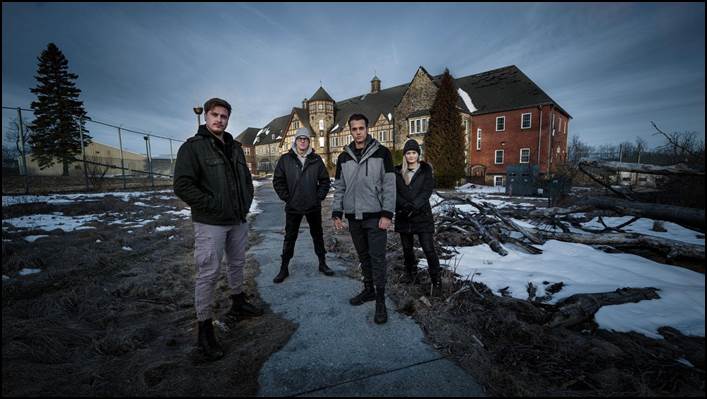 The Infamous Murder Trial Claiming Demonic Possession as the Defense Takes the Spotlight in SHOCK DOC Special, THE DEVIL MADE ME DO IT

Paranormal explorers brother and sister duo Dakota Laden and Chelsea Laden, and best friends Tanner Wiseman and Alex Schroeder, level up their fear experiment in an all-new season of DESTINATION FEAR – and their darkest, most terrifying road trip yet. The fear-chasing foursome embrace the darkness more than ever before – physically, emotionally and psychologically – as they push the boundaries of fear and daringly spend the night inside America’s most sinister and haunted locations. This season, Dakota challenges the team with darker hauntings and locations, and shocks them with the most disturbing experiment yet: removing flashlights and forcing them to blindly face the shadows of the night in true darkness. It’s one of many twisted and unnerving new experiments that will test their paranormal theories from the most uncomfortable of situations. [Hour-long episodes]

Chelsea Laden pulls the team out of the darkness and into the California sunshine … but only for a minute as she plunges them into the haunted madness of a legendary mansion. The crew takes a shot in the dark to see what energy is at play behind its walls.

Alex Schroeder has a big surprise in store for Dakota Laden, Chelsea Laden and Tanner Wiseman when he takes them back to a decrepit Illinois poorhouse so scary that they swore never to return. But will tragic new information about this location force the team to re-evaluate the haunting?

SHOCK DOCS – THE DEVIL MADE ME DO IT

Charged with a brutal murder, a Connecticut man claims his innocence insisting, “the devil made me do it.” For the first time in U.S. history, the existence of demonic forces is used as a defense at trial. SHOCK DOCS: THE DEVIL MADE ME DO IT examines the harrowing events leading up to the murder and the astonishing court case that followed. Getting to the very heart of evil and to where the actual terror lies, the family, aided by renowned demonologists Ed and Lorraine Warren, must do battle with overpowering demons. Based on the real-life inspiration for New Line Cinema’s horror film, “The Conjuring: The Devil Made Me Do It,” this terrifying documentary dives into the true story with never-before-seen interviews with the family, the Warrens, the defendant’s lawyer and local police.

Jack Osbourne returns to the United Kingdom to revisit his childhood home and past haunts in the county of Buckinghamshire – a notorious paranormal hotspot – seeking the dark truth behind terrifying, unexplained mysteries and experiences he had there as a young boy. On his journey, Osbourne makes stops at the family home where he spent his formative years, a local theater and ancient pub, and Missenden Abbey, a notoriously haunted locale that was the scene of regular childhood school trips. [Hour-long episodes]

Expat ghost hunter Jack Osbourne revisits haunted U.K. hot spots from his past – the theatre where Ozzy Osbourne and Sharon Osbourne took the family to see pantos as kids and the ancient local pub down the road –both rife with ghost sightings and unexplained supernatural activity.

Ghost hunter Jack Osbourne investigates Missenden Abbey in Bucks, scene of regular school trips in his childhood. The abbey is said to be a hotbed of terrifying paranormal activity, haunted by, among others, evil monks who ran riot there centuries ago.

Paranormal investigators Zak Bagans, Aaron Goodwin, Billy Tolley and Jay Wasley respond to urgent calls for help from desperate homeowners whose lives have been thrust into turmoil from unexplained activity inside their private residences. After hearing each family’s haunted account and reviewing bizarre evidence that was captured in their home, Bagans sends the crew on a personal house call to meet the family and get to the bottom of their paranormal emergency. Armed with their equipment, the team conducts a thorough investigation to see what evidence they can capture, while Bagans oversees the activity from his headquarters, providing insight and applying experimental tactics from his unique vantage point. After analyzing the evidence, Bagans shares the findings in a one-on-one meeting with each homeowner, offering them much-needed advice and resolution. [Hour-long episodes]

Zak Bagans sends the team to Wappingers Falls, New York, where the owner of a historic home claims that a dark presence is harassing her boyfriend. The case takes a disturbing turn when she reveals a strong attachment to the spirits that reside there.

Zak Bagans sends the crew to a horse ranch in rural Florida to help the new owner unravel claims of a manipulative presence on the property. Has a history of slavery and a potential curse on the town made the ranch a threat to all who enter?

The creepy collection of haunted artifacts housed inside Zak Bagans’ Haunted Museum are getting the spotlight in THE HAUNTED MUSEUM, a new horror film anthology series produced in collaboration with filmmaker Eli Roth. The series presents frightening and hellish tales inspired by the spooky relics on display in Zak Bagans’ Las Vegas museum. Bagans, a devoted collector of the macabre, is opening his museum vaults and sharing the secrets and stories behind a curated selection of his most prized haunted items through scripted shorts produced by Roth and his accredited team and with featured commentary from Bagans. [Hour-long episodes]

After receiving a cursed television from Charles Manson, a criminology student slowly loses his grip on reality. Can he resist the dark pull of the TV, or will he succumb and become the latest “family member” to kill in the infamous cult leader’s name?

A British paranormal investigator faces great danger when she attempts to unravel the mystery surrounding one of the most infamous and dangerous paranormal objects on the planet – a haunted doll with the power to harm anyone who lays eyes on it.

The Ghost Brothers – Dalen Spratt, Juwan Mass and Marcus Harvey – flip the switch on paranormal lore by shining a light on its darkest secrets. In the second season of GHOST BROTHERS: LIGHTS OUT, the hype men of the haunted investigate iconic paranormal hot spots to find out if the legends are really true and if these places are still plagued by the horror of the events that occurred there. Using unconventional experiments, they are ready to expose the haunted holdouts hanging around these locations. [Hour-long episodes]

Dalen Spratt, Juwan Mass and Marcus Harvey take on one of the world’s largest and most iconic paranormal locations: Trans-Allegheny Lunatic Asylum. The guys are more vulnerable than ever before when they split up to locate a mysterious black mass known as “The Creeper.”

In HAUNTED SCOTLAND, renowned American medium Chris Fleming and Scotland’s Gail Porter lead an expert paranormal team to investigate the chilling crimes, supernatural sightings and terrifying stories across one of the most haunted countries on earth: Scotland. With exclusive access to places where a film crew has never been allowed before, they will try to make contact with the spirits to explain the paranormal mysteries that have haunted Scotland’s most iconic landmarks for centuries. [Hour-long episodes]

In one of the most dramatic landscapes in Scotland lies Glencoe, the site of a treacherous massacre. Nearby stands Barcaldine Castle, said to be plagued by a curse. The team encounters a malicious male spirit when they spend the night in this haunted abode. 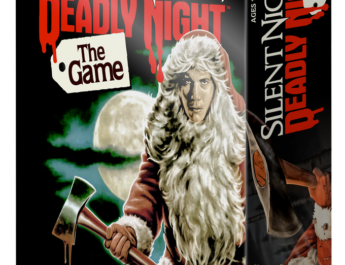 SILENT NIGHT, DEADLY NIGHT: THE GAME Is Coming Down the Chimney