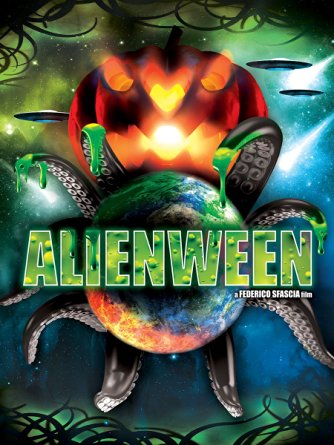 ALIENWEEN – HALLOWEEN PARTY APOCALYPSE is ready to make a hell of a party on the 20th of September!

19th September 2016, Los Angeles – After many screenings at international events, ALIENWEEN, the new sci-fi horror comedy by Italian director Federico Sfascia, hits the stores of North America this coming week. Described as a “melt” movie, ALIENWEEN brings back to the screen the special fx, the atmosphere and the irony of the science fiction movies of the eighties we loved, like CRITTERS and GREMLINS, blending them with influences from Japanese anime. Bringing together Halloween and aliens, this movie is ideal for a Halloween night screening with friends.

ALIENWEEN will be released by Sector 5 on the 20th of September on DVD. The DVD is in pre-order on Amazon and other web stores. It’s already available on VOD by Gravitas Ventures on Vimeo, Youtube and other platforms.

ALIENWEEN is set during the Halloween Night. There’s an old house, a group of stoned guys, drugs and gorgeous chicks…but there’s also a silent and deadly alien invasion that comes from the sky. The slimy contagion will change the party…forever!

Alastair Orr Talks About TRIGGERED Ahead of the UK Premiere