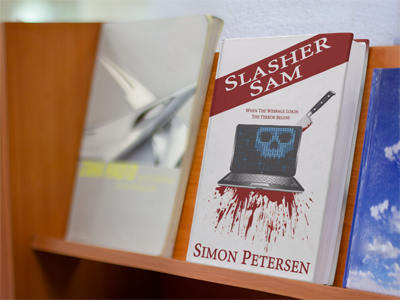 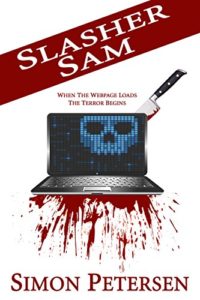 In cyberspace, everyone can hear you scream – especially if you’ve fallen prey to Slasher Sam, a murderous blogger and the star of Darkwater Syndicate’s new blackly comedic horror novel of the same name.

Taking a page from the Scream movie series, Slasher Sam follows the exploits of a horror-movie obsessed serial killer who posts the details of each murder to a blog for the world to read. Indeed, the book consists of the killer’s actual blog posts.

Dismayed that the slasher movie genre is currently deader than a Crystal Lake camper on Friday the 13th, Slasher Sam brings new life to the art form by ending the lives of mischievous campers, sex-crazed teenagers, unruly partygoers, and anyone else who breaks one of the fundamental rules of being in a slasher movie.

It’s written in the first-person perspective, putting readers so close to the action that they’re practically in the splash zone when the blood and guts go flying. And is there ever blood – Sam’s a savvy killer, too well-versed in slasher films to make rookie mistakes, which is why the kill count scores well into the double digits.

When Sam isn’t describing the latest kill in gory detail, the blogger discusses their personal life, horror trivia, as well as any other thoughts that might cross a serial killer’s mind.

Slasher Sam is available now from Amazon or Barnes & Noble, with an audiobook due out later this year.