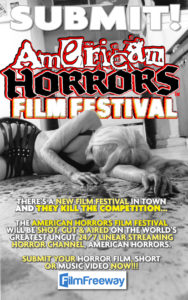 What’s in store for the festival?

The American Horrors Film Festival will be have it’s own tv special with it’s participants, panelists, audience members and everyone who walks the red carpet of death to be filmed for a tv special to be aired worldwide on the new American Horrors Roku channel (over 131,000 cumulative installs on Roku alone since October,2015)!

Amazing films from all over the world will be shown in the main theater with a brand new screen, 4K digital projection, over 200 leather bound seats, brand new sound system, food delivered to your seat, wicked vendors, Halloween surprise give-aways and convenient parking!

The festival will by hosted by horror legend, Hart D. Fisher, and co-hosted by Wisconsin horror host, Deadgar Winter and his legion of Deadgar’s Dead Girls from his show, Deadgar’s Coffin Classics!

And what films can you expect to see at the festival? Well, they just started their search for the best horror films out there!

They’re looking to break in the new blood, to give the bleeding edge creators a platform to build their careers & give them exposure to a worldwide audience of hungry horror fanatics. The American Horrors Film Festival is looking for the best in new horror from around the world in any of the following main genre groups:

Horror in all it’s forms, whether it’s a horror thriller, animated horror film, a horror suspense film, a supernatural or sci-fi horror film, if it has to do with the horror genre, then you should enter it.

So if you’re looking for a festival to submit your film to then you’ve come to the right place. As you can see, this will be a fabulous festival for your film to be shown at. On top of that, they have amazing prizes for filmmakers, and will show the ultimate support for your film. And about those prizes…

Please submit your entries through FilmFreeway:

The American Horror Channels are linear streaming uncut horror tv channels owned and hosted by legendary horror creator, Hart D. Fisher. 24 hours a day, 7 days a week, you can watch for free worldwide on your Roku (use channel code AMHOR to add American Horrors to YOUR Roku) online at www.americanhorrors.com and filmon.com! Watch on your ipod, ipad, iphone, or Android by downloading the FilmOn App!!!

For complete details on the festival, please visit: 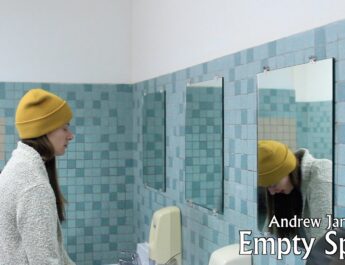