Hillbilly Horror Stories is a mostly paranormal show hosted by stand up comedian Jerry Paulley and his wife Tracy. They touch on all things eerie including true stories behind your favorite horror movies, Rock n Roll and the occult, unsolved mysteries and creepy true crime. Serious enough for the true paranormal fan but funny enough for the skeptics! Proud member of the BombPod Media Network

Jerry Paulley is The Rent Daddy, a professional stand up comedian living in Lexington, KY. Jerry has been fascinated by the paranormal since his childhood when he grew up in a haunted house in Fairdale, KY.

Tracy is Jerry’s wife.
(that’s right, he’s lucky as hell).
She enjoys quiet evenings at the gun range and high quality velvet art. She has been fascinated with the paranormal ever since she heard that Bobby Brown had sex with a ghost. Well, it’s his prerogative!

Jerry and Tracy talk about the strange case of Emilie Sagee and Doppelgangers. Andrea Whitney from the Jaspe Newsboy Newspaper tells about a friend reaching out from beyond the grave to look further into his death. Writer, director and musician John Law comes on to discuss his new movie The Hatred.

Jerry and Tracy tell you about the haunted Toys R Us in Sunnyvale CA, Tell you a sad but heart warming story of Jake and his best friend Chris. They also tell you a verry disturbing Christmas story about 7yr old Henry. Ember Hammond, former host of Color Me Dead Podcast joins us for a fun segments on siriel killer facts that you may not now! 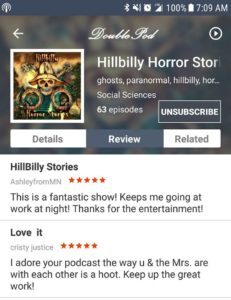 “Jerry and Tracy are so fun to listen too! The research is done very well and is very professional. Great mix of spooky with funny! Keep it up you two!”

“Love your podcast and I look forward to listening to you two while I am at work. It makes my day more enjoyable!”

“Absolutely love you guys. I listen to it every week and get so excited when a new episode comes out! I love the humor and paranormal mix. I can totally relate to Tracy and all of her hilarious comments. Keep it up!”

“Jerry and Tracy do such an amazing job with Hillbilly Horror Stories. I enjoy listening to their podcast, so much research and thoughtfulness and love go into each of their podcasts. For those who have never listened I really recommend you doing so you will not be disappointed!”

“Simply amazing! Take a listen, be open and get ready to be scared! Hillbilly Horror is coming your way!!!!!”

Start listening to all of their episodes today at:

-Shop at their store

-Check out their Patreon page and support the show

-Listen to their episodes beginning with episode 1