SUPERPOWERS, BUT NO SUPERHEROES IN
THE WORLD OF ACHILLES, INC.

Comics Experience and Source Point Press are excited to announce that their new four-issue comic book miniseries, Achilles, Inc., will debut at the Chicago Comic and Entertainment Expo, known as C2E2, on April 6 through 8. Achilles, Inc. explores what happens when the people who get superpowers don’t put them to any good use. With writing by Andy Schmidt and art by Daniel Maine, Francesca Zambon, and Marco Della Verde, Achilles, Inc. delves into a world where super-powered people have used their abilities to exploit humanity and destroy the world economy.

In the midst of this crisis, Ransom Yeong, an ex-cop, steps right into the middle of a class-war between the “Boosters” and the “Duds.” But he’s not alone in his crusade as he finds Kyra, a talented attorney determined to help, Mishy, his sharp-tongued administrative assistant and Dani, a booster with electricity-control abilities, all of whom feel powerless in the new world order. Together, they craft a plan to take advantage of their oppressors’ weaknesses and restore freedom to the world.

“I was wrestling with ideals and ideas about society when I wrote this series. We were fostering a young girl and a little boy at the time and I was confronted with a system that’s both helpful but also makes things more difficult for certain types of people, through no fault of their own,” said the series’ writer Andy Schmidt, who is also the founder of Comics Experience. “Achilles Inc. is a metaphor for many of those ideas, but ultimately, I hope it’s just a lot of fun for people to read, whether any of the social stuff comes through or not. If it doesn’t entertain, it’s missed the mark.”

‘Working on Achilles, Inc. was really fun, and learning experience for me,” said Daniel Maine, the artist on the series. “It was my first step in doing a full miniseries as the main artist and also gave me the opportunity to develop my creative process and design characters and costumes. Also, I really think the idea of this world, with the Boosters and our heroes, is really interesting, with a lot of possibilities! I cannot wait for people to enjoy our work.”

The publishing partnership between Comics Experience and Source Point Press gives alumni from Comics Experience’s Creators Workshop, education courses, and mentorships the opportunity to have their comics published and distributed. The publishing program was announced in January 2018 and four titles will be released in April: the miniseries Achilles Inc. and The Family Graves, and the trade paperbacks Grief and Wretched Things.

New Series Achilles Inc. has Super Powers, But No Heroes 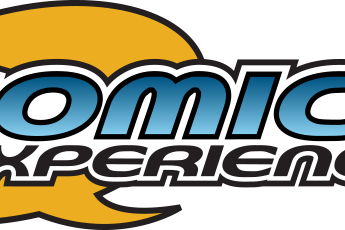