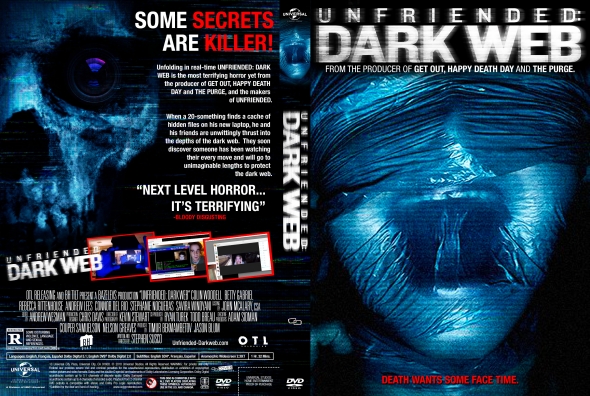 Here are some of the horror DVD/Blu-Ray releases for October 16th!

When a 20-something finds a cache of hidden files on his new laptop, he and his friends are unwittingly thrust into the depths of the dark web. They soon discover someone has been watching their every move and will go to unimaginable lengths to protect the dark web. Unfolding in real-time, Unfriended: Dark Web is the most terrifying horror yet from the producer of Unfriended, Happy Death Day, and The Purge.

A small-town doctor learns that the population of his community is being replaced by emotionless alien duplicates.

Ash has spent the last thirty years avoiding responsibility, maturity, and the terrors of the Evil Dead until a Deadite plague threatens to destroy all of mankind and Ash becomes mankind’s only hope.

Carnage! Terror! Banana skins! The mighty prehistoric ape Schlocktropus has emerged from hiding to embark on a full-scale rampage across a quiet Southern Californian suburb. The police are baffled. The army is powerless. The body count is rising. But when Schlocktropus encounters a kindly blind woman (Eliza Garrett, National Lampoon’s Animal House) who sees beyond his grotesque visage, the homicidal simian is presented with a chance at redemption.

The Westernized grandson of a shaman returns to the wilderness to learn more about his Native American heritage. When he encounters powerful evil spirits, he enlists the aid of his lover and a local chief to stop the spirits.

On vacation at a remote lake house, a mother and her two young daughters must fight for survival after falling into a terrifying and bizarre nightmare conceived by a psychopath.

Relentless action and unflinching horror await in the Amazon in this cult classic from filmmaker Ruggero Deodato (Cannibal Holocaust). An ambitious television reporter and her cameraman investigate a series of grisly murders as well as the disappearance of their bosses’ son. But when they trace both stories to the depths of the jungle, they discover he is the prisoner of a drug cartel led by renegade Colonel and his army of sadistic natives. Now their big scoop has become a nightmare of sudden violence where the ultimate assignment is to survive. The stellar cast includes Lisa Blount, Leonard Mann, Willie Aames, Richard Lynch, Eric La Salle, Gabriele Tinti, Michael Berryman and Karen Black.

The stakes are raised for survivalist Burt Gummer (Michael Gross) in his most dangerous monster hunt yet. When Gummer’s hired to capture a deadly Assblaster terrorizing South Africa, he and his new sidekick, Travis Welker (Jamie Kennedy), engage in a battle of survival against the fiercely aggressive Assblasters and Graboids. Discovering the monsters have evolved into even more lethal creatures, their killer mission takes on a whole new level of unseen terror–far more than they bargained for.

Witness sheer terror come to life in this Unfriended 2-Movie Collection from Blumhouse Productions, the producer of Get Out, Happy Death Day, and The Purge. In Unfriended, watch in real time as a group of teenagers in a chat room find themselves getting picked off one-by-one on the anniversary of their friend’s suicide. Could the dead friend be responsible? In Unfriended: Dark Web, a man’s new laptop leads him and his friends into a section of the dark web, where an unseen individual will do whatever it takes to keep them away, even murder. A terrifying thrill ride, the Unfriended 2-Movie Collection will leave you questioning every online interaction.

Maude (Adelaide Clemens), a 25-year-old medical student living in Germany, is still trying to pick up the pieces after her identical twin Cleo disappeared one year prior. When visions of Cleo’s violent abduction begin manifesting as hallucinations, Maude returns home to face her grieving family in Australia. Once there, however, the increasingly vivid details of Cleo’s disappearance surface in Maude’s nightmares. Initially unsure if the dreams are just the cruel creations of a troubled mind or evidence of psychic communication with her sister, Maude becomes convinced that Cleo is still alive. Together with Cleo’s fiancé (Alex Russell) and the police detective working the case (Jonny Pasvolsky), Maude uses the visions to trace Cleo’s movements. When she finally catches up to Cleo, Maude discovers her fate is intrinsically linked to that of her sister.