As you may know, February is “Women in Horror” month. To celebrate, PromoteHorror.com asked women from different professions if they would like to answer some questions about being a “Woman in Horror,” and more. One of those women, who was kind enough to answer our questions, was actress, producer, and director Monique Dupree aka Tha True Original GATA. Lets see what she said about being a “Woman in Horror”…

-Monique: I’ve been a fan of horror all my life. Its in my bloodline. I wasn’t really allowed to watch, but would watch anyway. I love comedy and horror growing up and always though I’d do one or the other.

-Monique: I never thought I’d just be a fan of the genre. I knew that one day, I’d be doing something, even if not in front of the camera, in this genre. I’ve always be one to push for wha I wan until I get it. Giving up was never an option. I’ve always be an odd force of nature. Just sort of, bloody dance to the be a of my own heartbeat….

-Monique: WELL, it means a lot to me personally. While I don’t always get recognized as such because of the fact that I do so many different things (wrestling, cosplay, comedy I adore that theres a platform for people like me and its being taken more seriously as a craft as a whole. I don’t think scream queens got the respect widely deserved to them for years now. I was floored and honored when playboy announced a top sexiest scream queens of all time and I made that list. Tiffany Shepis is also another strong woman in this industry that I love and adore.

-Monique: Absolutely!! Debbie Rochon has always been a major influence on me. To work with her has been amazing as well. She’s been a trailblazer for me. She will always be my goddess of horror.

-What do you think the future holds for women in horror?

-Monique: We are already seeing a positive shift in women who are in horror. I think it will only get better from here. More female writers and directors putting women in more creative roles in horror. I just think that a revamp is happening.

-Monique: I would love to be the hero in a horror. For some earthly reason, I’m always seen as the villain or sometimes, the victim.

-Monique: I just finished a film called The Dark Net with Darkstone Entertainment.
I had the pleasure of teaming up with Troma Entertainment again over the summer where I played a character called Calliban for Shakespeare’s Sh*tstorm.
I’m also working on a project this summer called Death Care as well.
Even though it’s not horror, I’ve continued to work in Wrestling for Tommy Dreamers promotion House of Hardcore. I’ve had the pleasure of not only being a wrestling Valet, but doing production and social media management as well.

We would like to thank Monique Dupree for taking the time to answer our questions, but more importantly for her contribution to horror! 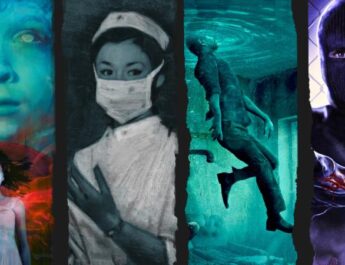