Here are some of the horror DVD/Blu-Ray releases for June 30th!

Man and killer whale clash in a fight to the death! Sleek, intelligent, beautiful … and hell-bent on revenge. Producer Dino De Laurentiis (King Kong, Ragtime) and director Michael Anderson (Around The World In 80 Days, Logan’s Run) join forces to present the rousing action-adventure tale of Orca: The Killer Whale. It’s the story of one powerful being against another: a strong, determined fisherman (Richard Harris, Unforgiven) versus an equally determined killer whale. When the giant whale’s pregnant mate is maimed and killed by Harris, the whale seeks vengeance: smashing boats, attacking a seacoast village, and eventually luring his human adversaries to a final confrontation in the marine creature’s own arctic turf. Charlotte Rampling, Will Sampson, and Bo Derek (in her feature film debut) also star in this seafaring epic brimming with nail-biting suspense and spectacular special effects.

Named one of the scariest clowns on screen by Bloody-Disgusting.com, Art The Clown returns and sets his sights on three young women, along with anyone else that gets in his way. Terrifier is based on a character from the successful horror anthology franchise All Hallows’ Eve. Not for the squeamish! Bonus features include: Art the Clown Time Lapse Make-Up Video, Deleted Scenes, Interview with lead actress Jenna Kanell, Behind-The-Scenes Footage, Audio Commentary with writer/director Damien Leone and David H. Thorton (Art the Clown), 2-disc pack includes a region free DVD and Blu-ray in NTSC (U.S. format) , Still image gallery, Red-Band & Green-Band Trailers, English and Spanish subtitles, Collectible Reverse Cover Art

After a deadly viral outbreak, an elite squad of special forces soldiers must infiltrate a quarantine zone to rescue a scientist who holds the only cure to save mankind. In a last attempt to contain the mutated virus, they launch a final strike against the infected, risking all of humanity in the process. Bonus features include: Spanish Subtitles, English CC, English 5.1 Surround Sound and English Stereo 2.0, DVD is Region Free

Gregg assumed it would be just another night out with friends, but things take an unexpected turn when he, his brother, and their girlfriends are kidnapped by the crazed Dr. Divine. The doctor, a twisted genius, has developed a radical method of life extension – transplanting the brains of his elderly and very wealthy patients into the bodies of the young. When Gregg escapes from the doctor’s lair, but finds the local police unwilling to accept his story, he realizes that it’ll be up to him to put an end to the doctor’s diabolical ‘treatments,’ or run the risk of him and his friends losing their heads…literally.

The footage of three filmmakers shooting a web series has been recovered. Intending to debunk famous Internet urban legends and rituals, they perform a blood ritual that summons an ancient primordial entity in the process. As the spirit’s unstoppable evil seeps into their daily lives the trio are left with a single choice: Submit to its will… or die!

A three hundred year old succubus disguised as a high school teacher seduces her most popular students, only to possess them into kidnapping more students so she can feast on their blood. The only ones who can stop her are three social outcasts and the school’s psychotic janitor. A sick, raunchy gore-fest in the tradition of 1980s SOV horror.

After inheriting an ominous painting, a family soon becomes disturbed by a demonic presence known as The Whispering Man.

Driving across the isolated MOOR will take another hour before they reach their destination. MIKE, FRANK, and GRAHAM are off to a MUSIC FESTIVAL. Mike`s great idea of a short cut across the isolated Yorkshire Moors in a cheap car was not a good decision when the car breaks down miles from anywhere. Forty miles trying to hitchhike is an impossible task, especially as the only traffic seen so far, has been a farm vehicle. A passing car passes speeds up as the three men frantically start thumbing for a lift. In a situation like this, the only solution is to sit down and break open a few cans. The approaching vehicle on the horizon pauses the MENS drinking for a few moments. The BUS is looming closer. The Men off their feet are hitching like idiots. Inside the BUS the GIRLS goad the driver to give them a lift. MISS SINCLAIR reminds the GIRLS it is an official trip, not a public service. The GIRLS wave at the MEN as the BUS passes. TWO of the GIRLS lift their tops at the MEN. The MEN raise their drinks in salute as the BUS passes off into the distance. Resigned the MEN set off walking. Over the next rise a good mile away, the BUS has stopped with a puncture. MISS SINCLAIR asks the MEN for help, the reward being a lift into the village. MIKE and GRAHAM get to work flirting and chatting up the GIRLS on the journey to the village. Trying to take advantage of the girls was probably not a good idea. Following them around the folk museum, MIKE for a dare urinates on one of the exhibits. Laughing as they walk off, MIKE`S act will not bode well. The outcome will not be good for MIKE and the group. Revenge and horror will strike as the WITCH known as the Hag of Black Howe Moor have been disturbed by Mike`s disrespectful action.

Trapped in a secluded cabin in the woods, Robin, and her sister, Cody, must overcome their dark past while battling threats from deadly masked strangers. They will need to work together if they want to make it out alive. Bonus features include: Teaser Trailer, Trailer, 2 bonus short films, Behind The Scenes featurettes: audition video, makeup timelapses, Filmmaker Audio Commentary with Director John-Paul Panelli, Audio Commentary with Writer/Director John-Paul Panelli and co-writer Schuyler Brumley, English 5.1 Surround Sound and English Stereo 2.0, English CC, Spanish Subtitles, Blu-Ray is Region Free 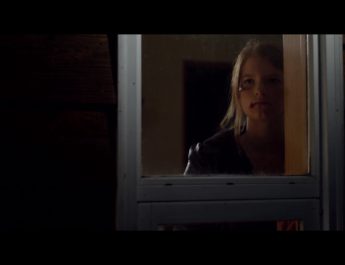