-Sarah: I honestly can’t remember a time when I wasn’t one. From a young age, I had a deep fascination for the supernatural, the Romantic, the mysterious, the Transcendental—really all the things that inspire our collective human awe. I’m also a huge fan of science fiction in this regard, because obviously that which we do not understand or cannot rationally explain is often a powerful source of fear—or transformation.

Of course, I also owe a huge debt to my horror-loving parents for letting me read things that gave me nightmares, and for frequently falling asleep with their TV on, which enabled me to sneak down the hall and watch whatever random creepy movie was on at 4am.

-Sarah: I think it happened because it was inevitable. For one, I watched my father die of cancer at a young age—and anyone who has had to grapple with mortality and bereavement in childhood will tell you that your perception of reality changes irrevocably from that early experience of grief. You start asking deep, dark questions that adults are often ill-prepared to answer—and that is what ultimately led me inward and in pursuit of stories and ideas that either let me escape, or let my imagination come running back to me.

Fast-forward to college: I was a double English/Anthropology major. For some reason all the professors in the English department were hell-bent on forcing us to emulate Carver and Hemmingway’s minimalist prose, and “write what you know,” which has to be the worst creative advice ever anyway, but especially for inexperienced college kids. True to my subversive form, I ignored my professors’ instructions—and got my papers handed back with “Wrong Reality” in red ink at the top. Still, I continued to ignore the academic disdain for “genre fiction,” and just as I started my MA in Archaeology, I published my first story about an archaeologist trying to survive in a POW camp on the Moon …and there was no turning back!

I am truly fortunate in this regard. See, besides being a woman in horror, I’m also a woman who writes in the adult industry—so the potential for stigma is vast! However, when I got my first part-time adult script writing job, I asked my mom what she thought and she said: “honey, sex sells and why shouldn’t you be able to write AND pay your bills?” When I ended up landing more full time adult writing work, I asked her: “did you see this coming?” And she said: “yes, you were always so precocious.” She knew!

Really, the only “explaining” I have to do usually involves sexually unenlightened straight guys who make ridiculous assumptions about me because of what I write about. I’m pretty bored/tired of “explaining” though, so I think I’m just gonna rock my “Scarlet Letter” and keep on writing.

-Sarah: Hey, why not celebrate the ladies who make us scream and/or who do the screaming as well? I grew up admiring the sexy “scream queens” of the 1980s like Barbara Crampton and Jamie Lee Curtis. And what’s amazing is that while horror also embraces feminine beauty and sexuality in a powerful way, it also holds up the carnival mirror that lays bare (pun intended) the double standards, as well as how women who “violate” those standards become threatening to the status quo.

Indeed: we females of the human species have often been the source or subject of much real-life terror and suspicion in basically every culture all over the world. And this is in no way to discredit or put down the male experience or all the wonderful men of horror. However, I don’t think the horror genre itself would be quite the same without us all being able to draw inspiration from cultural traditions and historical legacies of sex-based persecution and prejudice towards women, as well as those uniquely female experiences at different points in history that still resonate or have morphed through time. For instance, in 2021 we are still: witches, adulteresses, whores, crazy exes, kinky cougars, insatiable succubae, jilted lovers, horny teachers, deranged spinsters, nymphomaniacs, man-eating serial killers, vampire seductresses, angry ghosts, vengeful shrews—and so forth. And many of these popular horror tropes above would probably not exist if society judged women in the same way as men, especially in regards to our sexuality. Multiply that inconsistency by a few centuries, and voila!

But on the happier side of history, I also like to think that Women in Horror month is also an opportunity to pay homage to our literary “Horror Godmothers.” In particular, I’m thinking of Mary Shelley, who went against the social norms of her time in order to write and publish Frankenstein. Ultimately whether you are a man or a woman, to write and thrive in horror is to push the limits, flirt with taboos, and ultimately engage within that space of shadow—and there’s room for everyone’s point of view in there too, which is awesome!

-Sarah: I’m honestly inspired by every woman that I see succeeding in the genre, no matter in what capacity.

On a more personal note though, working with director Angie Rowntree (@angierowntree) has been the biggest impact in my creative life to date, as she both a supremely gifted artist and generous mentor. It’s a wonderful and rare gift when you encounter someone who “gets” you and you are able to combine your creative powers in such an exhilarating way, so I’m eternally grateful that our paths crossed.

-Sarah: Again, with mad love and respect for all of our Scream Queens, I am delighted to see that we now have a much greater variety of roles and storylines being written for and about female characters—even including strong roles for women who are not in their teens or twenties (I’m thinking here of Toni Collette in Hereditary). As a writer of erotica, I obviously have no problem with female sexuality on display—but it’s nice to see that maybe we can have greater agency/control of how we express this, and also be other things too besides clichéd “sex kitten” or “virginal victim.” In horror, female characters are also allowed to want things besides the perfect man or relationship—this too is something that continues to improve.

-Sarah: I recently saw Relic and without spoiling it, I was really impressed with how director Natalie Erika James interwove some classical creepy horror elements into a much deeper visual metaphor and multi-dimensional take on the horrors of aging and dying, as well as the fear of losing ourselves and our memories in time. I’m always a fan of movies that are so rich with details that I have to go back and watch again, and Relic is definitely one of those!

-Sarah: As I said above, I believe there’s room for everyone in that shadowy hinterland that we horror-creatives all must engage in. The more people who join us in the exploration of our collective human darkness means that we have even richer stories to tell, and an infinite variety of them too—which means future is already “shining”!

-Sarah: For now I want to focus on writing, but someday I’d be open to producing or directing.

-Sarah: My favorite Final Girl to date is Thomasin in the VVitch. I mean, I really don’t see a downside to escaping from abusive religious fanatics and having pretty dresses, butter, travel, and the chance to “live deliciously”…and I’d wager Black Phillip in human form is probably pretty easy on the eyes, so win-win!

My favorite female horror movie villain to date is India from Stoker. I admire the way Wentworth Miller went about presenting such a complicated female character, and really enjoyed his exploration of psychopathy as a familial trait. I’d love it if he ever decided to tell us more of India’s story. 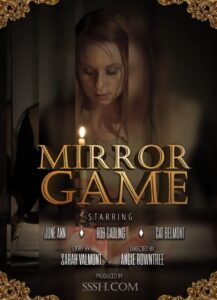 In Mirror Game, we begin in the present-day and meet a seemingly ordinary husband and wife, Michael and Giselle. Embarking upon a cross-country move to New England, both are doing their best to embrace change—and hold on to each other. However, when Giselle stumbles upon a strange book that is not at all what it seems, their lives will never be the same—or their own—ever again. Unaware of her own connection to the book, or the danger she is in, it’s only a matter of time before Giselle is in over her head—and also out of her mind, body, and soul.

I’m now in the process of creating a separate story (working title, Provenance) that is set much further back in time, and goes deeper into the occult premise behind the grimoire–and more. Without giving too much away right now, in Mirror Game, we see the protagonist Giselle surrendering her body and soul to sinister otherworldly forces—but in Provenance, I want to give you a dark fairy tale about the creator of the grimoire, who actually forges her identity and gains agency within that same darkness.

I was inspired to pursue this because one of the things that has always struck me about supernatural horror is that we rarely get to see or understand what’s happening from the perspective of the so-called “dark forces,” and/or we get stuck seeing only dualistic “good vs. evil,” when motivations driving conflict often lie within those shadowy shades of grey…so look out! 😀 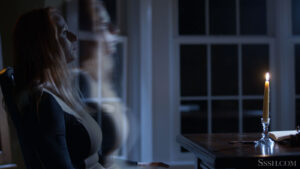 PS. I am also guest moderating the next #SexTalkTuesday on Twitter coming up on March 2nd from 8-9PM EST. In honor of Women in Horror Month, I’ll be doing a segment on the topic of sex and horror. Follow @sextalktuesday on Twitter and our hashtag – everyone is welcome and we’d love to hear from anyone among the horror community.

We would like to thank Sarah Valmont for taking the time to answer our questions, but more importantly for her contribution to horror! 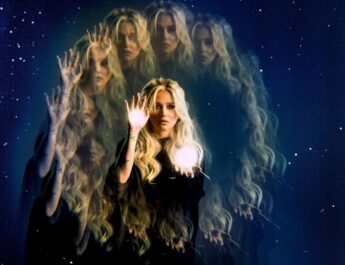 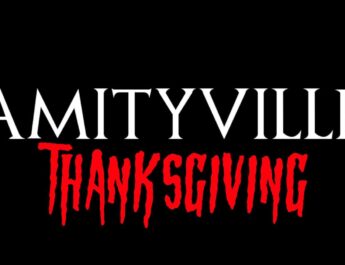