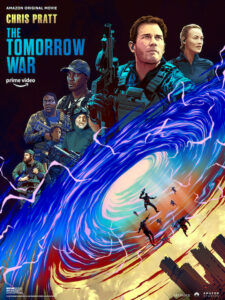 9B Collective’s Kevin Tong created the final image saying: “Amazon’s THE TOMORROW WAR is at its core, a story about everyday people from all walks of life coming together to fight against an overwhelming threat. The part in the film that best exemplifies that is the portal, because it is both a literal and figurative doorway to salvation and everyone goes through it and emerges at the same time, right into the action. The themes of diversity and using a doorway to drop into danger definitely informed this poster. To heighten that sense of danger and to create a stronger feeling of motion, I chose to make the direction of falling diagonal instead of just vertical.”