Los Angeles-based Dark Star Pictures has acquired the North American distribution rights to intense paranoia thriller ALONE WITH YOU ahead of its World Premiere at Fantastic Fest 2021. Dark Star is planning an early 2022 theatrical release for ALONE WITH YOU in New York City, Los Angeles and additional markets across the country, with the on demand and digital release to follow.

Written and directed by Emily Bennett and Justin Brooks as their feature debut, the film also stars Bennett, alongside horror favorite Barbara Crampton (You’re Next, Jakob’s Wife), Dora Madison (‘Friday Night Lights,’ VFW, ‘Chicago Fire), and Emma Myles (‘Orange is the New Black’). ALONE WITH YOU was produced by Andrew Corkin (Martha Marcy May Marlene, A Vigilante, The Beach House) and Theo James (Divergent) under their Untapped banner.

“We couldn’t be more excited to partner with Dark Star for the release of our debut feature ALONE WITH YOU. We share in their independent spirit and interest in challenging the status quo,” said Bennet and Brooks. They continued, “They truly understand the value of character driven story telling which has always been at the heart of our work. We cannot wait to unleash this twisted vision into the world with them.”

In ALONE WITH YOU, we follow a young woman (Bennett) as she painstakingly prepares a romantic homecoming for her girlfriend. As she goes about this her apartment begins to feel more and more like a tomb as voices, shadows, and hallucinations reveal a truth she has been unwilling to face.

“Emily and Justin have crafted a truly unique horror film that utilizes atmosphere and human emotion to drive a narrative of terror that will hit closer to home than most of us would like to admit. This is a horror film that is much more than horror, spotlighting incredible female performances, diversity and a feeling of claustrophobia that could not be more relevant in our current society” said Michael Repsch, Dark Star Pictures. 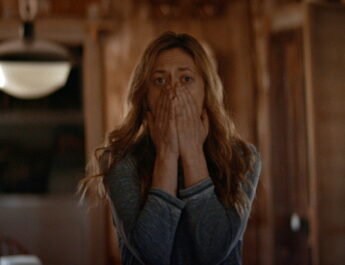 THE DARK AND THE WICKED – In Theaters, On Demand & Digital November 6th