THE STRANGER is a brave and psychological story about society and the roles we play in a world that celebrates narcissism and psychopathy.

With its twisting plot line and the philosophical questions it raises, The Stranger is perfect for people who engage in mind games and like risky play. 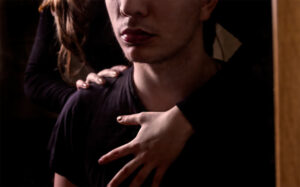 The film aims to push the edges of convention, not conforming to comfortable boundaries with the story exploring violence head-on. Through scrutinising this difficult topic, they are looking to get a greater understanding of their own and others’ motivations – ultimately bringing us closer as a society. If we understand it, we can address it.

This 20-minute psychological thriller takes place in a house based somewhere in England.  The film opens with three young men; Adam, Benny and Chris, who all have a dark and violent past, playing a game of poker. Adam’s current girlfriend, Diane is also part of the gang, but it soon becomes clear that her involvement with all of the men is far more sinister than any ‘traditional’ relationship.

After a night of violence, sex and assault between all of them, the men wake up with a sudden urge to go outside and play.  Setting off on a journey none of them seems to have chosen, there is an evident shift in the power dynamics leaving them all uncertain, vulnerable and ultimately in fear.

If you enjoy films like Donny Darko, A Clockwork Orange,  Mother or any of Gaspar Noés masterpieces, then this production is right up your alley.

Allan Watts said “What if our emotional reactions didn’t align with our social expectations. Who decides what our emotional and physical pain should look like?”

There is a correlation issue in society that makes things that are not connected become so by correlation. “I have your keys, therefore I own your house, I own your house because I have your keys.” We all live with the pre-existing ideas of how we are supposed to react to certain events in our lives, and when they align with how we actually do react, it makes us feel safe and certain. But when reactions to trauma and big life events are expressed in ways that we do not agree with, our minds and the people around us judge us, telling us that we are wrong.

What would the world look like if we were allowed to give our true emotional response regardless of society’s expectations of us? Humans – when alive are never neutral, never nothing. We are always stimulated by something.

“When we are not allowed to feel our emotions freely as a child, we may develop an uncoordinated feeling of the true self.” (Donald Winnicott). If 30% of a children’s needs are met, they will develop a secure attachment style. When given the chance to develop and grow into their true selves, a child doesn’t need to rebel on every occasion and insist and demand that their needs be met. We can follow the rules because we have for a time been able to ignore them entirely.

The filmmakers are offering several perks including

– A 24-hour link to the film. So, you can watch it before anyone else, and avoid waiting months for the film to make its debut at festivals.

– A ‘behind the scenes’ video. Specially made for our contributors which will give you a peek into the making of the films, including interviews with actors and crew.

The aim of the project is to create a world where the rules are different and explore what would happen in such a setting. Would it be possible to understand how different people react and accept that there is no right… or wrong way of behaving?

Best Student Film Award Nominee Tonks, had her first short, “MY DOLL BETTY” debut at the Spook Screen festival in 2021. She produced and directed the film while still doing her BA in Creative Producing at Essex University. Growing up in the circus industry, she is a devoted horror creator. With a degree in theater directing, she has produced a range of horror and dark arts experiences; short films, podcasts, online live performances, theater, circus and performance art. She is excited to take on this film production as her next creative challenge.

Sasha Lorraine is a makeup artist and costume designer from San Diego. She did her internship with productions as The Old Globe and Punchdrunk and she has a track record as a dresser for fashion shows on her home turf. She is especially interested in horror and is developing her skills in special effects and makeup for film.

Xander Dunbar is a multi-instrumentalist and three-time award-winning composer based in Wales. His work focuses primarily on dark and alternative compositions. He has expanded into the role of composing for film in recent years after writing for several professional ensembles such as the highly prestigious baroque group “Red Priest”.  Collaborating with Tonks he wrote the music score for “My Doll Betty”.

You can find out more about the Indiegogo campaign here: https://www.indiegogo.com/projects/the-stranger-a-dark-psychological-thriller#/ 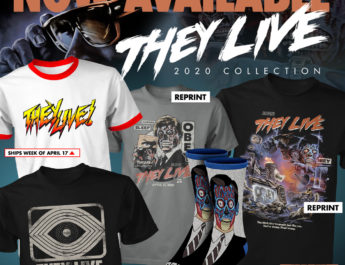 THE WOLF MAN, THE MUMMY, THEY LIVE Apparel