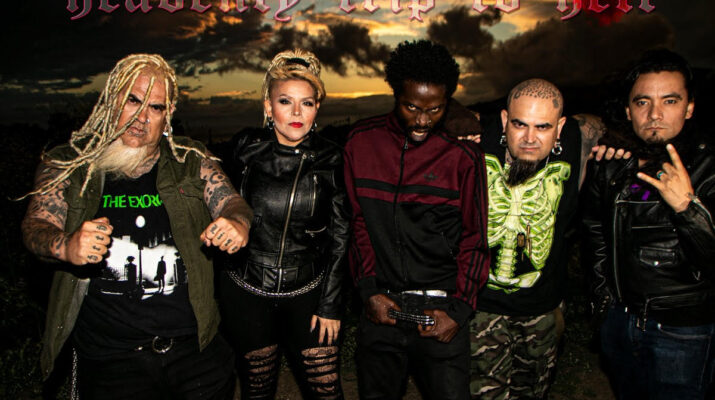 Los Angeles – based industrial/rock band, HEAVENLY TRIP TO HELL has just unveiled their new video and single, “Pumpkin Man”. The song is a shout to the “safety rockers”; those who are rock and roll only part time. They are just playing the part.

“Pumpkin Man” brings with it a message that rock and roll music should be dangerous; that it should belong to the streets. The band says, “The song was inspired by bands like Kettle Cadaver, GG Allin, and Danzig. With “Pumpkin Man”,  we wanted to push the limits to break boundaries and not be confined by rules in the music world. Safety rockers run and hide”!

HEAVENLY TRIP TO HELL (HTTH) was founded in 1996 when brothers Gerardo Christ and Sergio Natas decided they wanted to portray a different and more aggressive side of the Long Beach music scene. They set out on a mission to write music where lyrics were a focal point. Fascinated with early new-wave and assorted underground music, they were determined that a hardcore electronic punk, metal, rock sound was the musical direction to take so they began recording and performing their own Sepultura and Ministry influenced compositions.

Over the years HTTH gained a large following through numerous live shows. After playing many backyard parties, underground warehouse parties and raves, the band eventually moved on to bigger gigs at better known clubs in Orange County and the Sunset strip. They have shared the stage with bands like The Dead Kennedys, Soulfly, Body Count, Transmetal, L.A. Guns, Bang Tango, Too Short, and many more.

Today, HTTH consists of Gerardo Christ on vocals, Sergio Natas on bass, Vicky Vicious on synth and keyboards, Kurt Thompson on guitar and Jose Soto on drums. HTTH continues to sell out clubs all over Los Angeles and the South Bay and has toured around the country. Most notably HTTH was in a documentary called Road Dogs by Shane Aquino that was featured at various film festivals in Paris, Chicago and Montreal. HTTH is ready to leave the trenches and go mainstream with their new EP Pumpkin Man. Their main goal right now is to land a record deal or major distribution deal and tour across the United States.