SOME THINGS WON’T LET US GO…

STORAGE is a short psychological horror film that traverses loss through one man’s isolated evening in a rundown storage room. It is an exploration of how we mourn our loved ones and the struggle to escape the all-consuming nature of our grief, no matter how desperately we may want to move on.

STORAGE will be filmed without dialogue, allowing for an intimate, sensory experience via our protagonist: the crisp yet soft touch of a linen blouse, the flicker of a fluorescent lamp, the mournful whir of an ancient elevator, the unidentifiable, ominous scratching at a boarded-up door. Suspense and dread will be realized through a holistic sound composition that will capture the naturally occurring ambient noise of our filming location: a 110-year-old basement.

Supporting Women Behind the Camera in Horror and Broader Film Industry:

She is joined by cinematographer Elle Schneider (Woodlands Dark and Days Bewitched: A History of Folk Horror, 18 ½), VFX whiz Elaina Scott (Spider-Man: No Way Home, Grimm), Ashley Lynch of Gingerbreadgirl Post (13 Minutes of Horror, Ninjago), Bianca Beyrouti (Bring me an Avocado, The Singing Bones), and Berkeley Sound Artists (Marvel’s Runaways, 12 Hour Shift). Additionally, closed captions and audio descriptions will be provided by Jean Li to ensure accessibility for all audiences. Together, we are a women-led team spread across the Bay Area, Los Angeles and Vancouver, bringing a collective experience of some 180 feature films, shorts, and TV series.

-Virtual Group Conversation w/ the Cast & Crew About the Craft

-Executive Producer credit on IMDB, in the film credits, AND on special poster signed by cast & crew 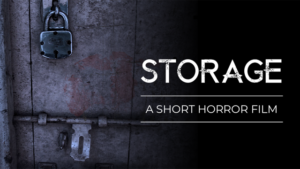 Visit STORAGE on Seed&Spark to…