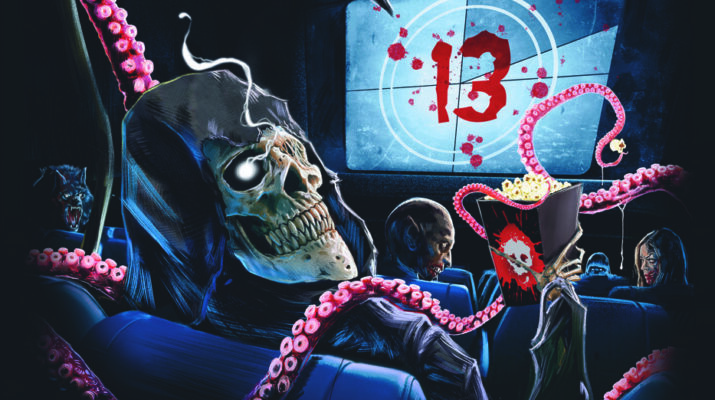 First off, we are excited to reveal our 2021 poster art from regular designer Ilan Sheady. 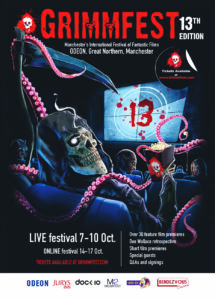 In response to the continued uncertainty surrounding the pandemic, and by popular demand, this year’s festival will be a hybrid event. The live event will take place at Odeon Great Northern in Manchester from 7th to 10th Oct and be followed by an online version, running from 14th to 17th October.

Grimmfest Online 2021 will offer audiences the chance to experience the festival programme in the comfort of their own homes, as well as enabling them to catch up on anything they might have missed at the live event.

We are excited to announce two exclusive feature film presentations only available on our virtual event and both UK premieres.

Ben Charles-Edwards explores the damage done and the demons unleashed by a traumatic domestic confrontation in FATHER OF FLIES, a nerve-jangling study of childhood terrors, family dysfunction and repressed memory, starring Camilla Rutherford and the late Nicholas Tucci in one of his last roles.

FOR ROGER see’s THE BLAIR WITCH PROJECT meet KRAPP’S LAST TAPE, as a grieving man, poring over video recordings of his late partner is confronted with some uncomfortable truths in Aaron Bartuska’s razor-sharp reinvention of the “found footage” movie.

Plus we will present an exclusive online Q&A with our 2021 Lifetime Achievement Award recipient Dee Wallace (E.T., The Howling, Critters, Cujo).

Passes and tickets can be purchased from www.grimmfest.com.

SEED OF CHUCKY, THE DIVIDE & DAYBREAKERS Amongst Horror Channel Premieres for May